Skip to content
Home » Blog » Activities » SRAP participates in events and work meetings with the Minister of Industry, Commerce and Tourism

During this week I have participated, as SRAP President, in several events and meetings in Canberra and Sydney following the official visit of the Spanish Minister of Industry, Trade, and Tourism, Reyes Maroto, to Australia.

First of all, I’d like to thank the staff at the Spanish Embassy in Canberra, particularly the Spanish Ambassador, H.E. Alicia Moral Revilla, as well as the General Director of the Chamber of Commerce of Spain, Ms Inmaculada Riera, for their continuous support and for getting SRAP involved on these events and networking opportunities.

On Wednesday 28th September I was invited to participate in a lunch meeting at the residence of the Spanish Ambassador in Canberra. I had the honour of representing SRAP members in front of Australian and Spanish diplomats and representatives of Spanish industries working in Australia.

SRAP member Dr. Luca de Toca also attended this lunch meeting. He was asked to talk about his experience leading the design and implementation of Australia’s COVID-19 vaccine rollout and the pandemic response in primary healthcare and among Indigenous communities.

The Spanish Ambassador asked me to give a speech about SRAP, the activities we are performing, and the new projects we are starting, including putting in contact Spanish and Australian universities and launching a pioneering PhD Cotutelle program between Macquarie University and Spanish universities, as well as connecting research in academy and industries. They also asked me to briefly talk about my research in Astronomy and connections with space projects. 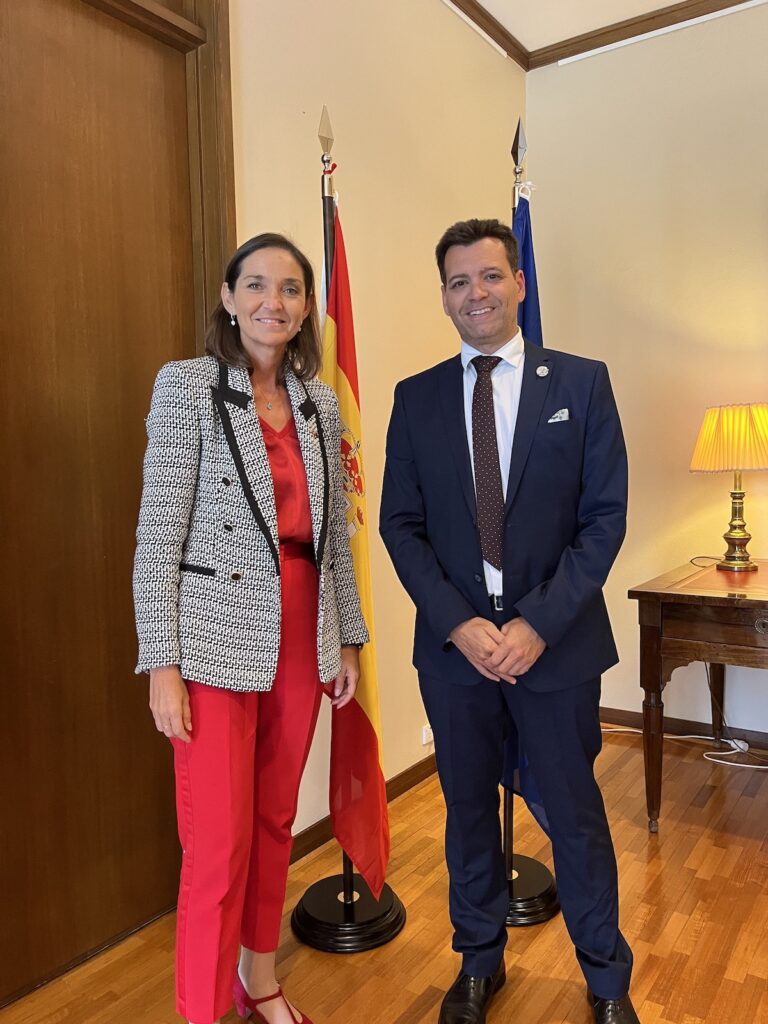 After the lunch meeting I had the opportunity of personally talking with the Spanish Minister of Industry, Trade, and Tourism, Ms Reyes Maroto, who congratulated us for the research and activities we are performing, and encouraged us to try to work closely with the Spanish Industries working in Australia. I also mentioned her that, although the Spanish research community is happy about the advances in the Spanish laws for Science and University Research in Spain, there is still much to do and improve, and that is something we are doing as part of RAICEX (the network of Associations of Spanish Researchers working abroad).

On Thursday 29th Sep I was invited to participate in the Australian-Spanish Business Meeting at the Four Seasons Hotel, Sydney, on the occasion of the official visit of the Spanish Minister of Industry, Trade, and Tourism, Ms Reyes Maroto, to Australia. The event was organised by the Chamber of Commerce of Spain , the International Confederation of Business Organisations of Spain, the Australian Chamber of Commerce and Industry, the European-Australian Business Council, and the Spanish Embassy in Australia. Around 100 industries attended the event. 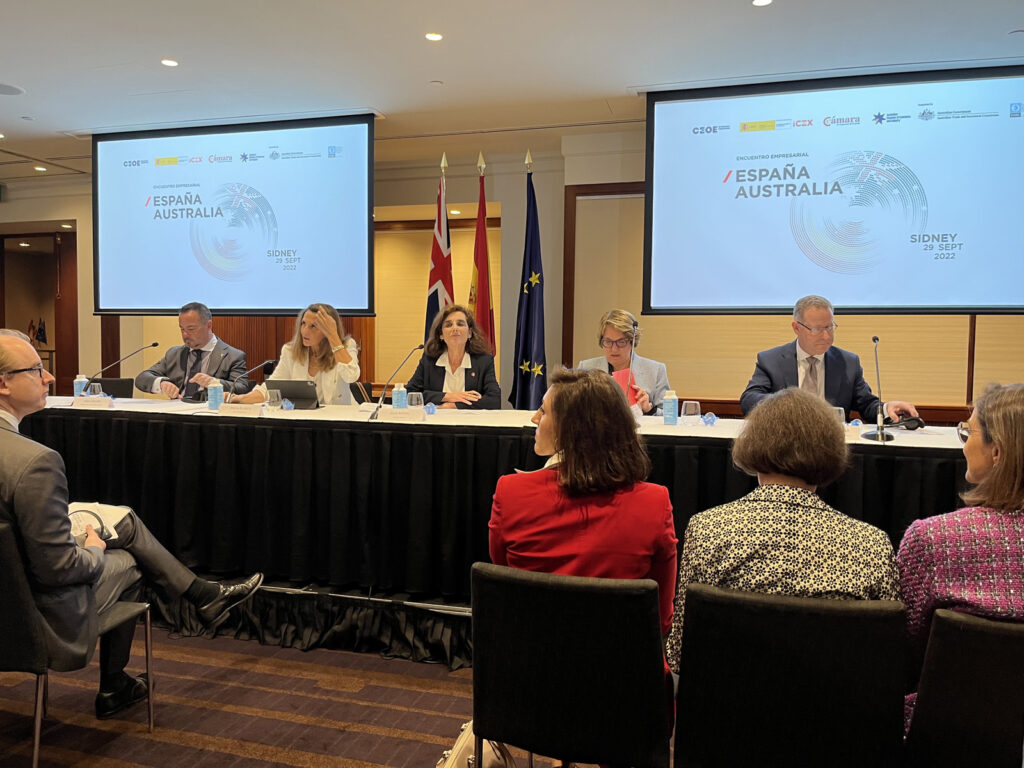 H.E. Alicia Moral Revilla briefly summarised the role of SRAP, mentioned that their SRAP President was in the meeting, and encouraged everyone to meet us and collaborate closer with researchers. Ms. Inmaculada Riera also emphasised the need of the transfer of knowledge and skills from research to industries. She asked industries to be more ambitious than they are now, encouraging them to connect with the academic world.

After the opening session, sessions about plans, opportunities key projects and capabilities in New South Wales, Queensland, and Victoria, followed. 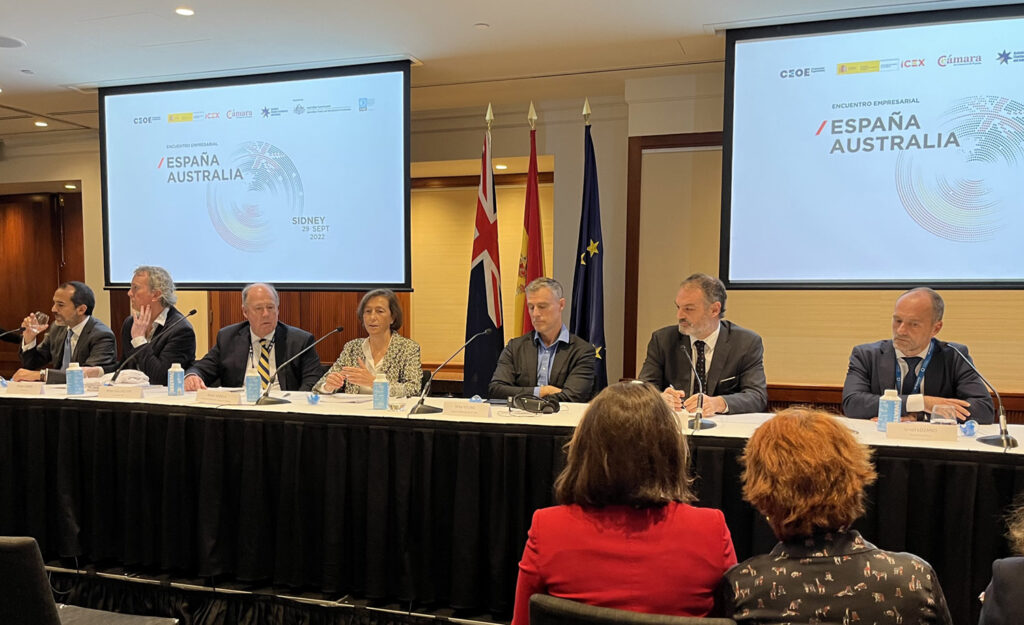 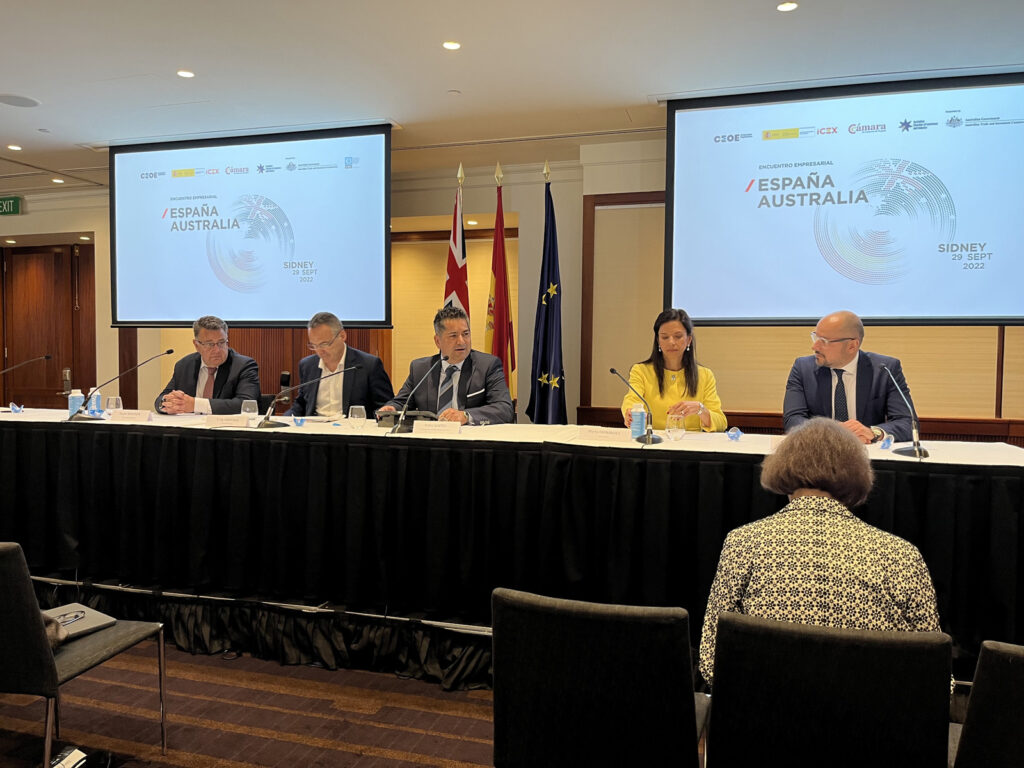 For the closing session, Ms Reyes Maroto, Minister for Industry, Trade and Tourism of Spain, and Mr Ed Husic, the Australian Minister of Industry and Science, provided the closing remarks with their speeches inviting participants to the Australian-Spanish Business Meeting to strengthen their connections between Australia and Spain. 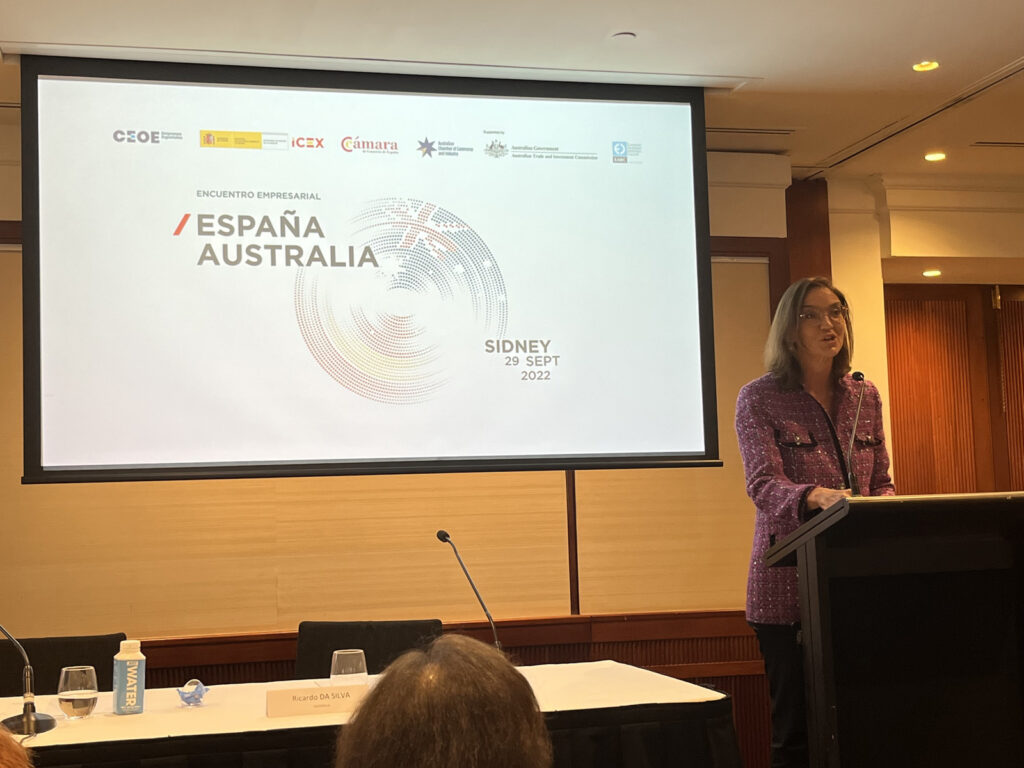 The Hon. Reyes Maroto, Minister for Industry, Trade and Tourism of Spain, during her speech in the closing session.

Reyes Maroto emphasised again the importance of involving researchers on these collaborations. Ed Husic even briefly talked in a good Spanish, thanking Reyes Maroto and the official diplomatic and business delegation coming from Spain for organising a busy agenda. 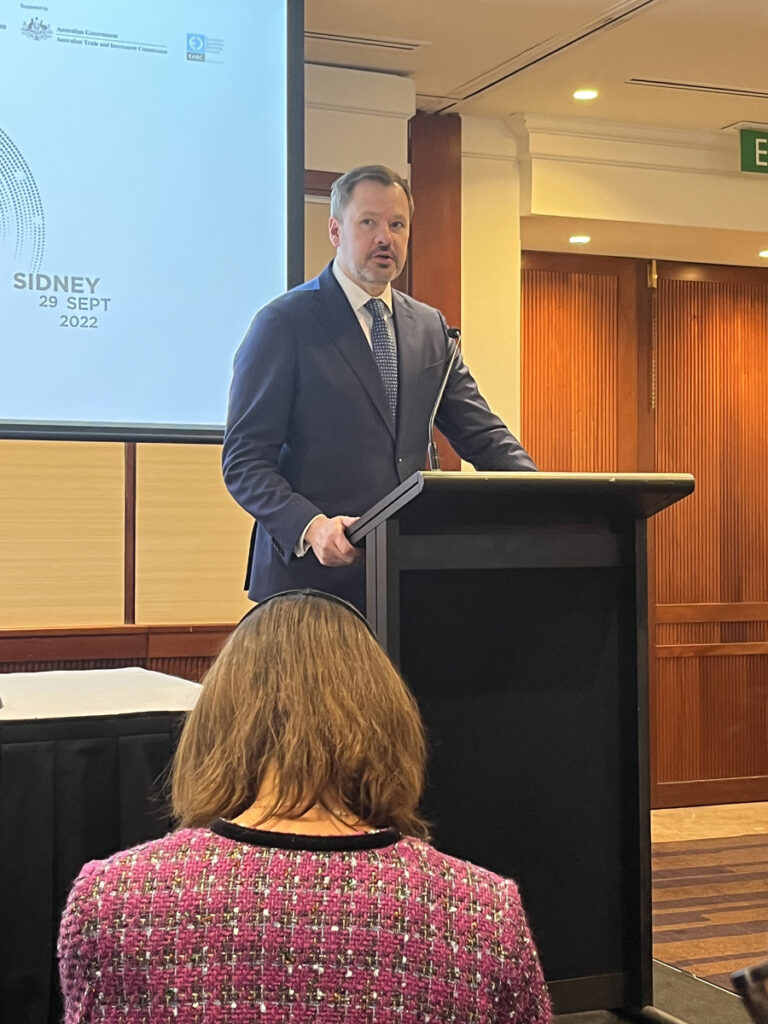 Australian Minister of Industry and Science, the Hon. Ed Husic, during the closing session.

During the networking cocktail that followed I also met and talked to many of the attendees to the event, most of them from the field of industry, and many of them interested to know more about SRAP and the research that our members are doing, as well as in how to participate in research programs. I also had some enquiries about the PhD Cotutelle programs between Spanish and Australian universities and how industries and business could be involved. 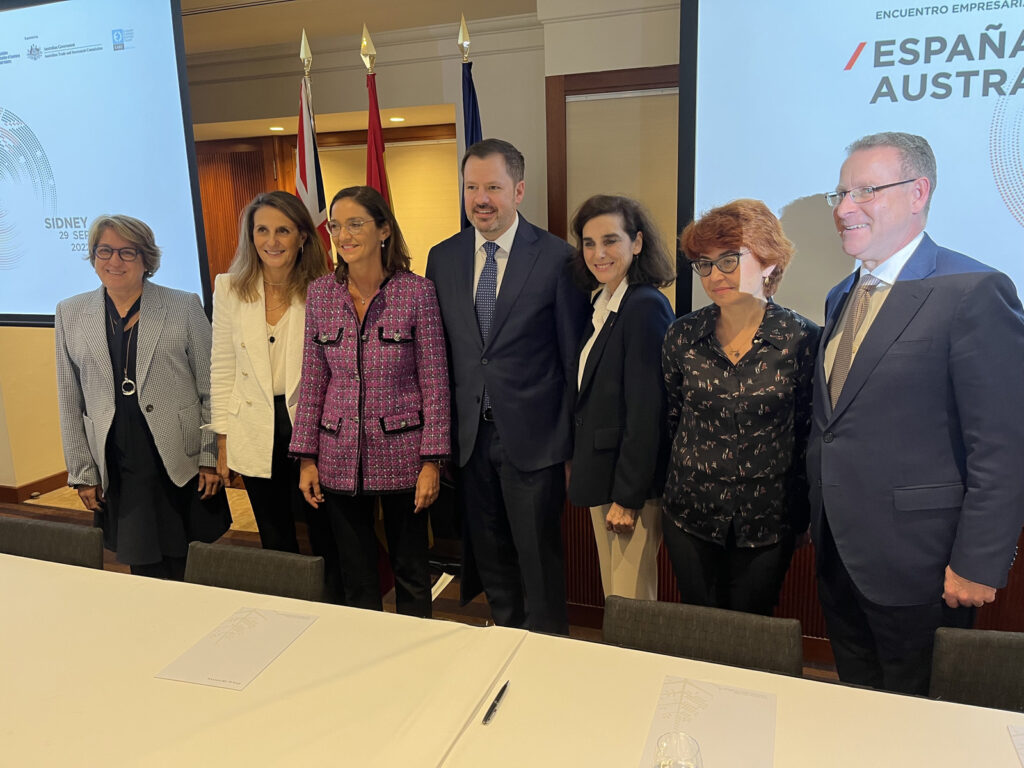 Personally, I have learnt a lot of this networking and diplomatic experience. I was impressed to know that Navantia has provided 60% of the ships of the Australian Navy, as well as listening to on-going conversations to strengthen collaborations in space and defence with Navantia, Indra and other companies. I also was excited to see all the investment that the Australian Government and some states like Queensland are going to provide for promoting renewable energies.

Definitely the impression I got from Australian and Spanish industries is the need of more involvement with academia and researchers.

Big Data, Quantum Computing, Artificial Intelligence, Digitalisation, and Space were some of the key topics on these conversations (also Health, Food Security, Energy, including Renewable Energy, and Infrastructure). Noteworthy, Spain has been identified by the Australian Government as one of the top-5 countries for strategic research (at the same level than Japan, France and the UK, with US the top country), so I’m very excited to see these opportunities between my two countries, and how SRAP could help to put people in contact and encourage them to build from there. 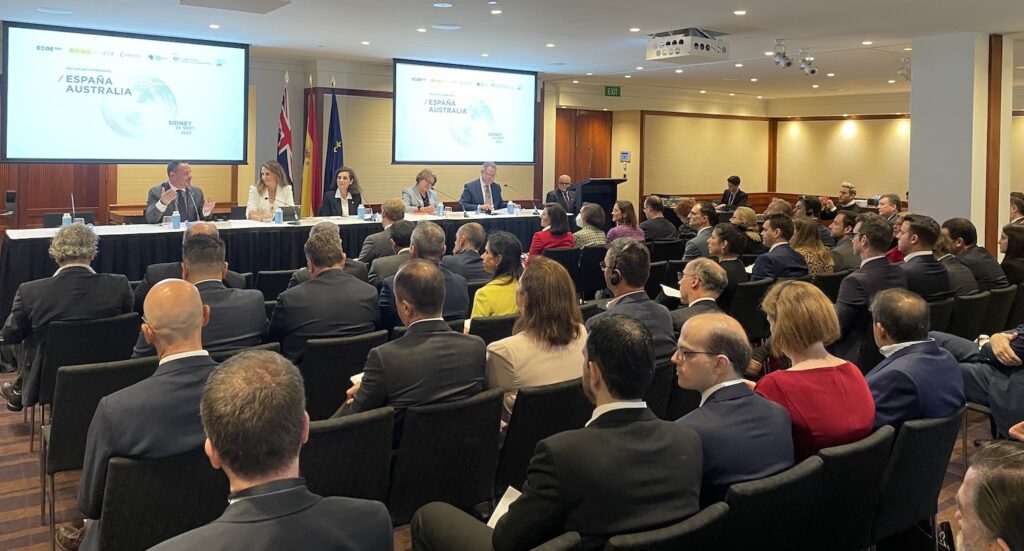 The Australian-Spanish Business meeting on Thursday 29th Sep is about to start.

A good summary of the Australian-Spanish Business Meeting has been published in the newsletter “Semanario El Español”, included below.