At the beginning of April 2022, the Australian Government released a statement detailing the strategic areas to invest in research with international collaborators, also promoting scientific diplomacy with those countries.

Spain is among the top 5 countries identified by Australia as strategic for research, since it appears in two of these blocks (Artificial Intelligence and Quantum Computing, and Vaccines and RNA therapies) ahead of countries such as Italy, Germany, Canada, Brazil, Switzerland or Singapore. Only one country, USA, is present in three of the strategic research fields. Three more, Japan, UK and France, are also in two of them. 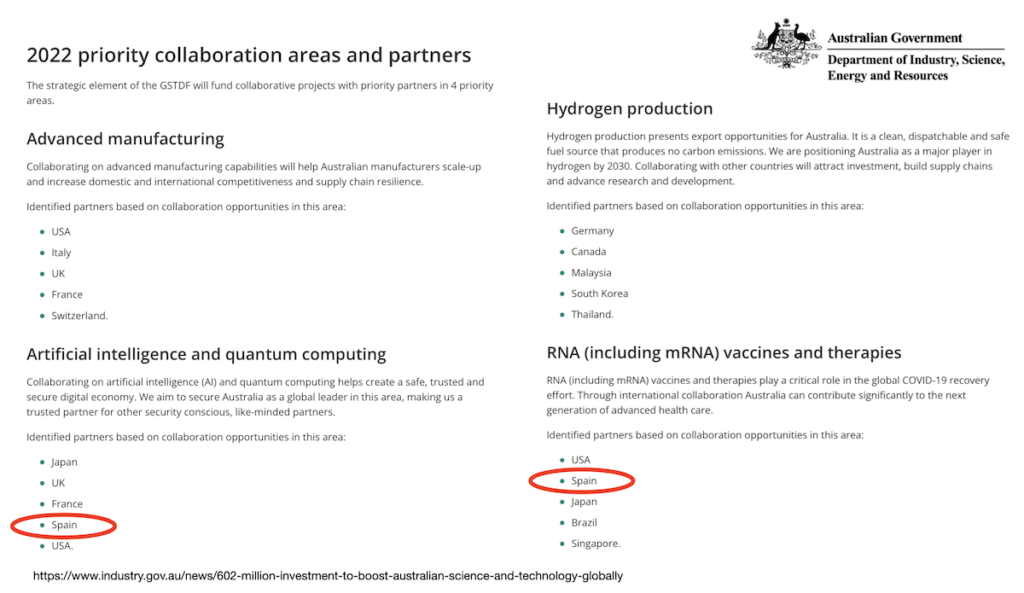 This contrasts with the information that Professor Carles Padilla (Dean, Internationalization and Multilingualism, University of Valencia) and Professor Carmen Vargas (Dean, Strategy, University of Seville), on behalf of the CRUE (Conference of Vice-Chancelors of the Spanish Universities) provided during the event “Building Bridges Between the Australian and Spanish University Systems” that SRAP organised jointly with the Cervantes Institute in Sydney on May 30th.

In their presentation, Professor Carles Padilla and Professor Carmen Vargas reported on the research fields in which there is more collaboration between Spain and Australia (led by Astrophysics, but closely followed by Oncology) and the number of joint scientific publications between Spanish and Australian universities between 2011 and 2022 (led by the University of Barcelona and the University of Sydney). The details in the following images.

Main areas of research collaboration between Spanish and Australian universities. Slide presented by Professor Carles Padilla and Professor Carmen Vargas on behalf of CRUE during the event “Building Bridges between the Australian and Spanish University Systems”.

Number of joint publications between Spanish and Australian universities since 2011. Slide presented by Professor Carles Padilla and Professor Carmen Vargas on behalf of CRUE during the event “Building Bridges between the Australian and Spanish University Systems”.

It is a good time to promote research between Spain and Australia.

If you want to know more or need more information on how to contact institutions, do not hesitate to contact us.