The event included a tour at the Anglo-Australian Telescope (the largest optical telescope in Australia), a visit to iTelescope (that has more than 20 robotic telescopes that can be used by amateur astronomers in any place of the world, even you can book time!), a walk around the Observatory with a local guide who explained the flora and fauna in and around the Warrumbungle National Park, enjoyed a beautiful sunset from the ANU Lodge (the majority of the participants stayed there for the night), an excellent bbq for dinner (including a surprise cake for the youngest participant, Javier, who turned 7 this day), and enjoyed the beautiful, dark starry sky including a session of astrophotography and telescope viewing. 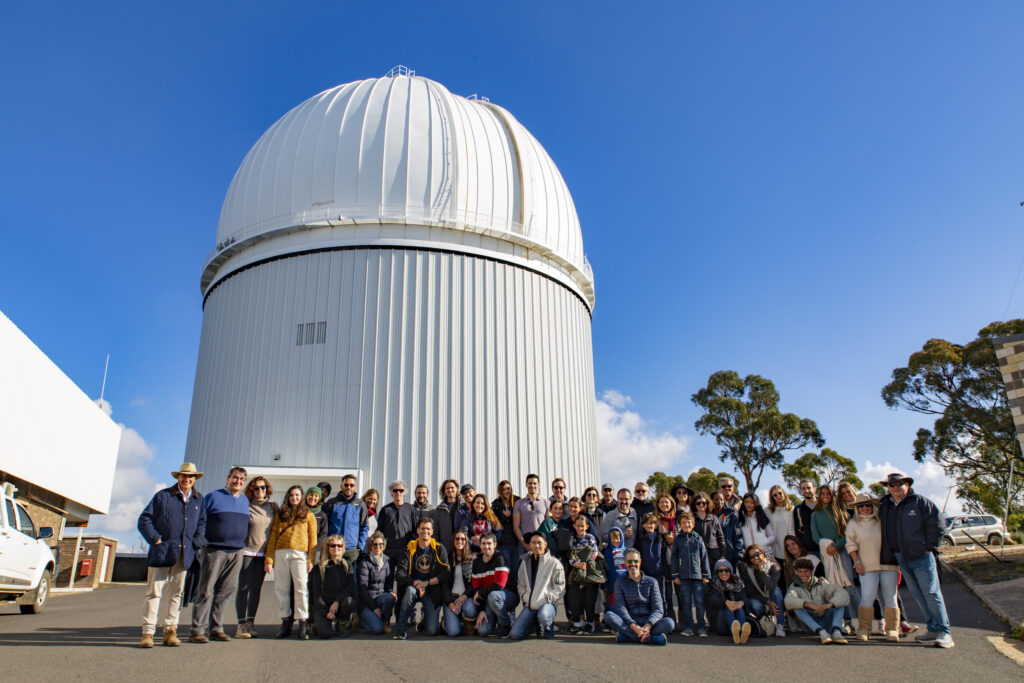 All the SRAP-IEAP group in front of the majestic dome of the Anglo-Australian Telescope. Crédito: Ángel R. López-Sánchez.

For stargazing, Ángel prepared two telescopes: a 80mm Skywatcher Black Diamond refractor and a 150mm reflector in a Dobson mount. The first telescope was used for astrophotography (first the Moon using a special adaptor for mobile phones, then using a specialised equipment that allowed us to get images using filters, including an hydrogen filter for nebulae). The second telescope was used for actually looking the astronomical objects with our very own eyes: the Moon, the Orion Nebula, the Carina Nebula, the Tarantula Nebula, the globular cluster Omega Centauri, the double star Alpha Centauri, the Jewel Box open cluster, the Lagoon, Trifid, Eagle and Omega nebulae near the Galactic Center, the Butterfly open cluster, the M4 globular cluster, among many others. For those who stayed till 2am we also enjoyed the view of Saturn and Jupiter. Furthermore, Ángel prepared his digital DSLR camera (Canon 5D) to do wide-field astrophotography and obtain a time-lapse of the night sky observatory Siding Spring Observatory while the group enjoyed the stars.

As an extra, our member Pol Gurri (who is also an astrophysicist) used his dron to get outstanding videos and images of the group and the observatory in the late afternoon and during the sunset. 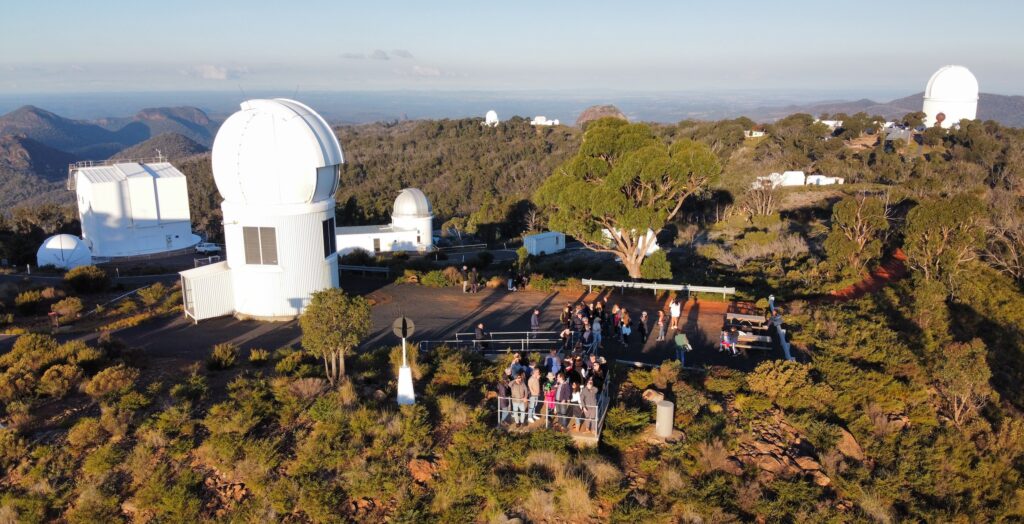 Aerial view of the SRAP-IEAP group near the Skymapper Telescope obtained by a dron. The Anglo-Australian Telescope is the big dome at the right, the 2.3m ANU Telescope is the square building at the left. Some of the videos obtained with the dron can be downloaded from here and here (careful, they are heavy). Credit: Pol Gurri.

Some photos of the activity: 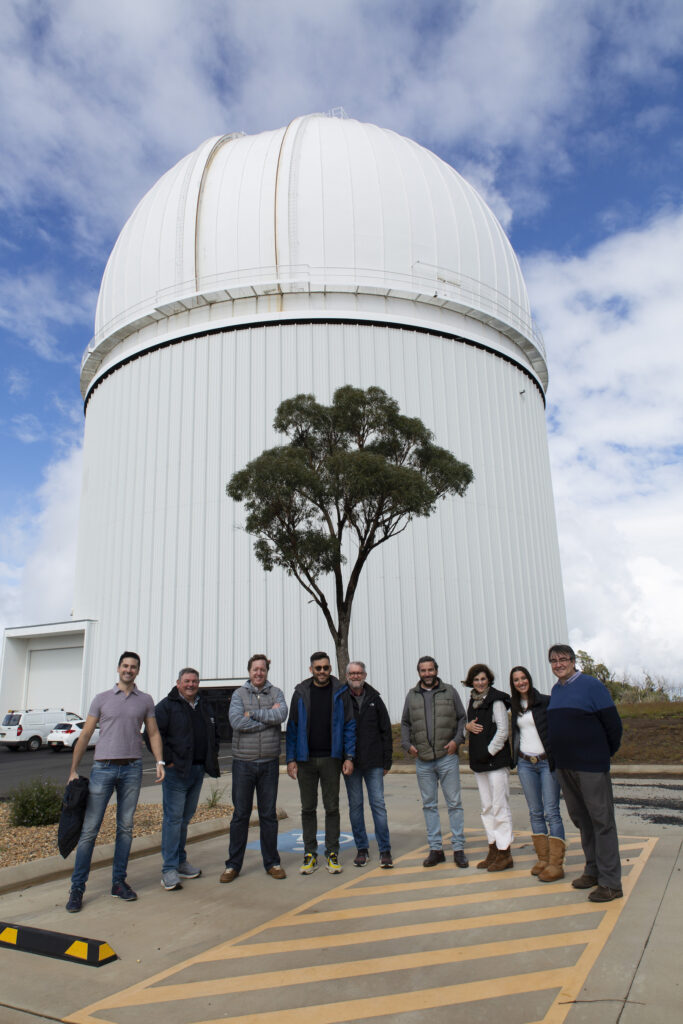 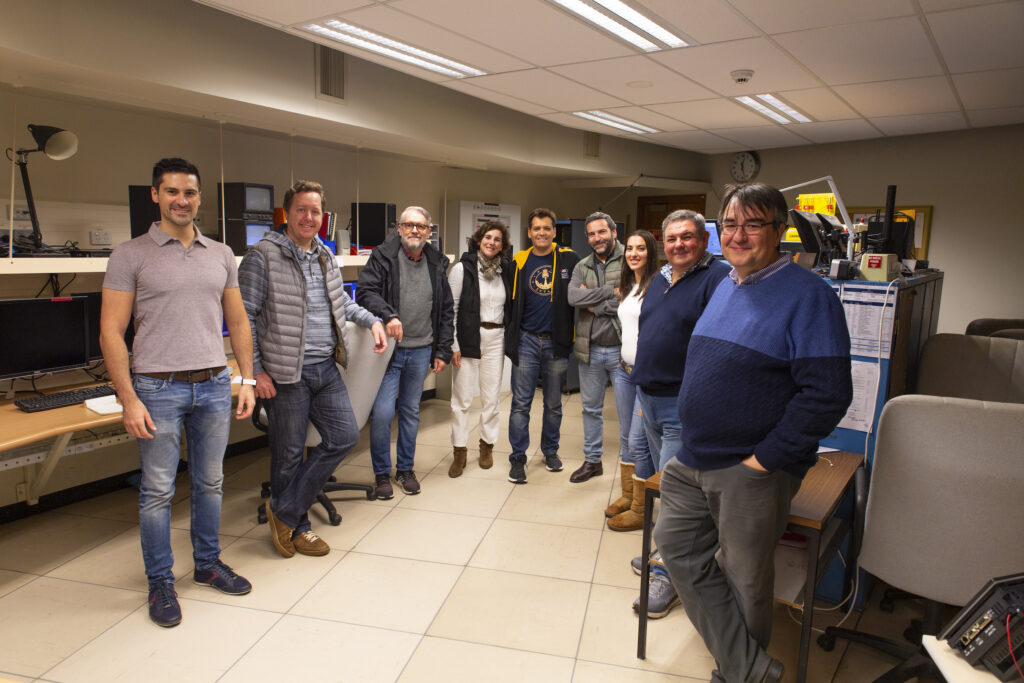 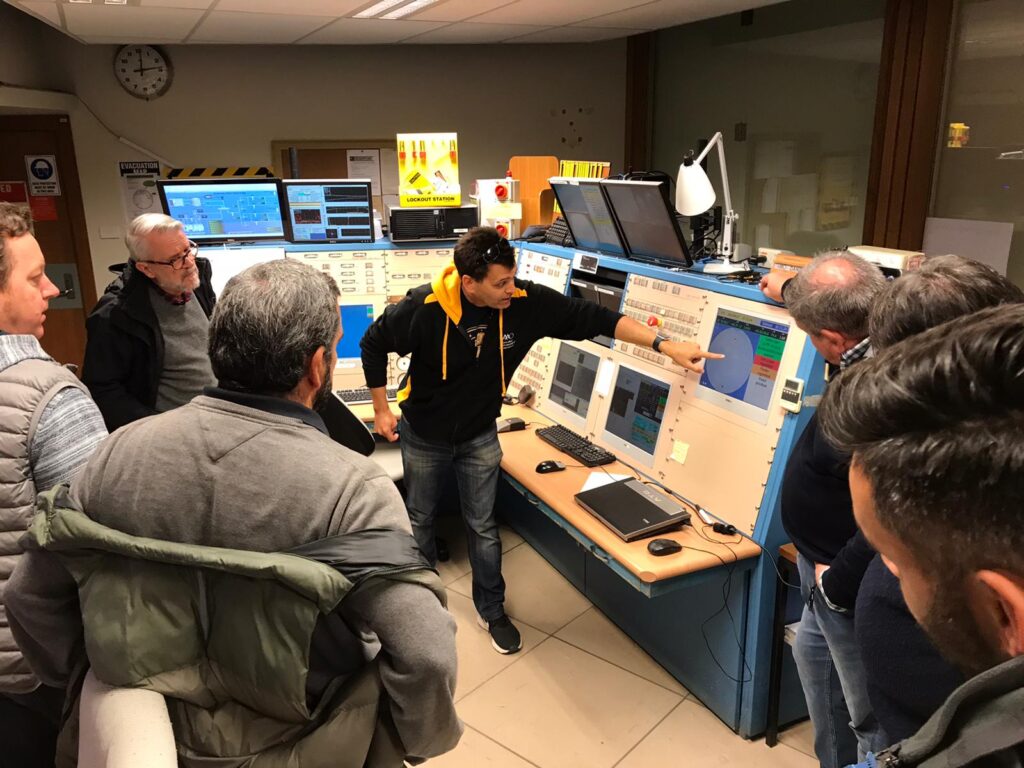 Ángel explaining how to use the Anglo-Australian Telescope. Credit: Joaquín Valderrama. 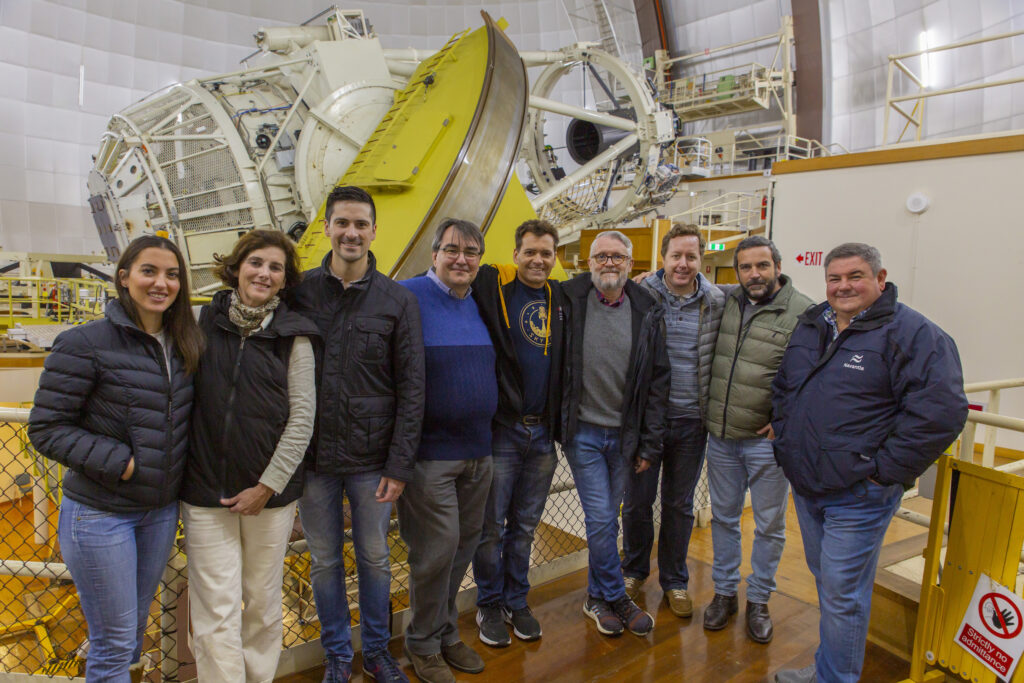 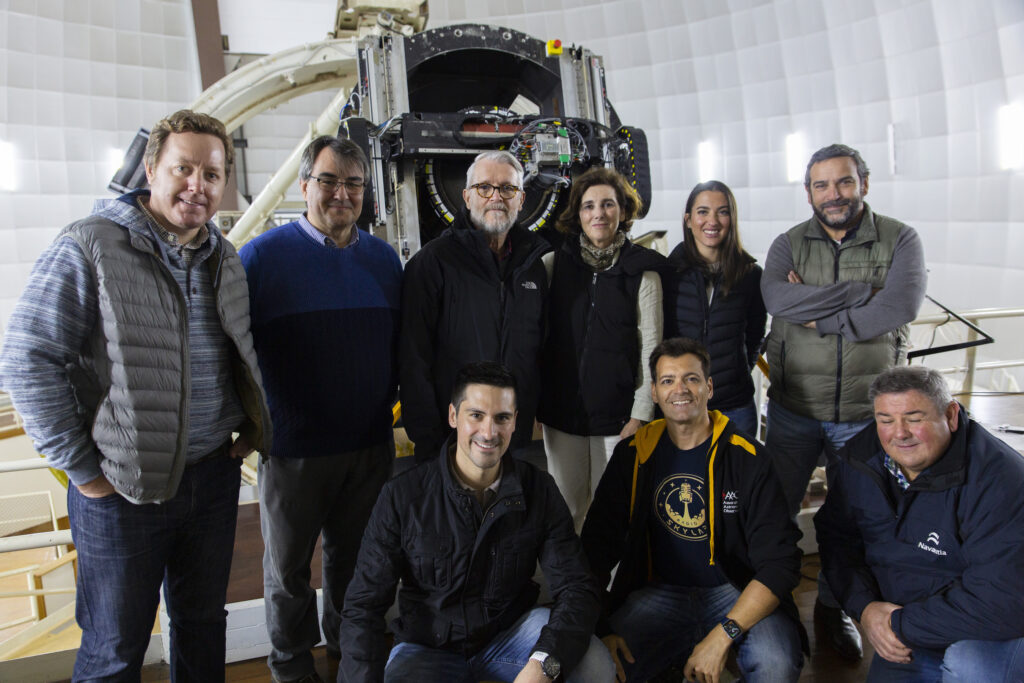 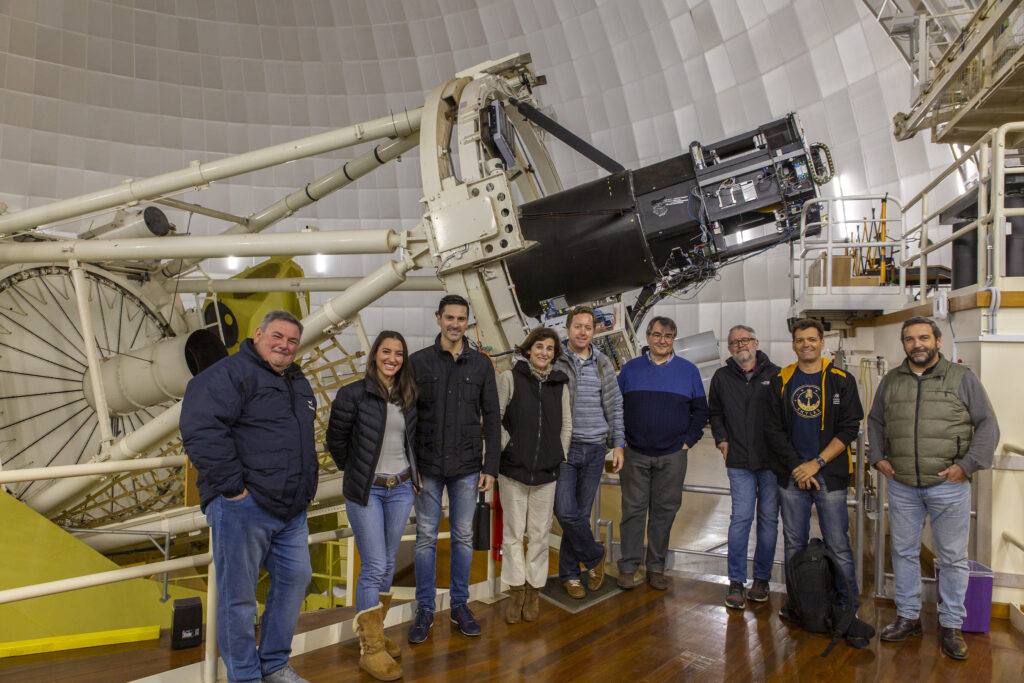 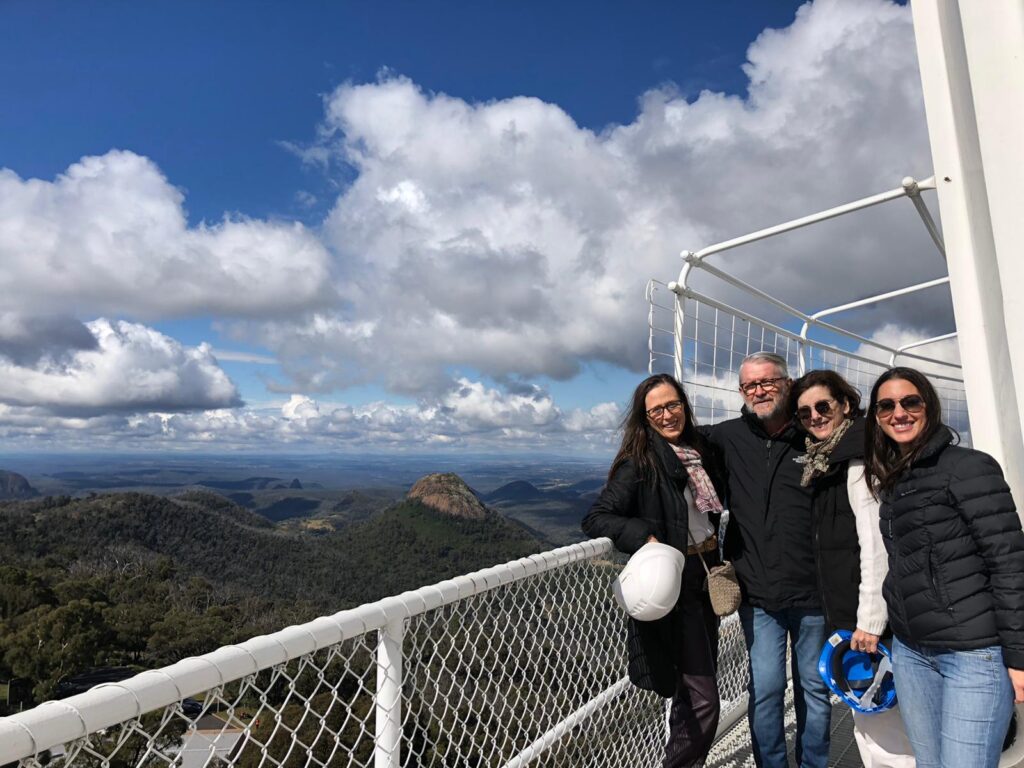 The view from the Anglo-Australian Telescope “catwalk” is breathtaking. Credit: Carmen Salvador. 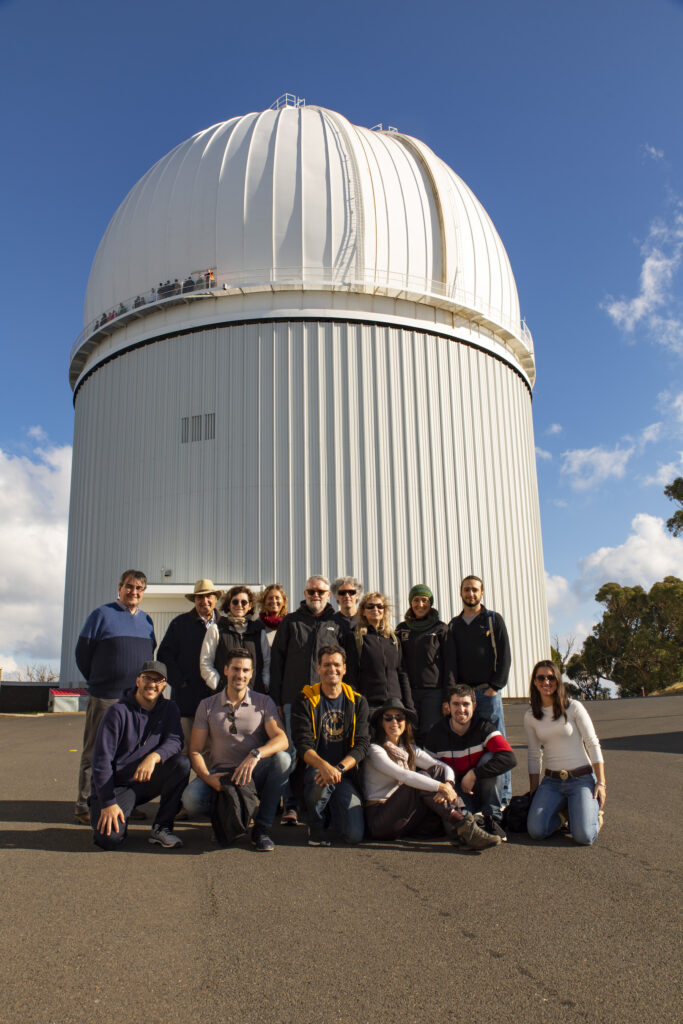 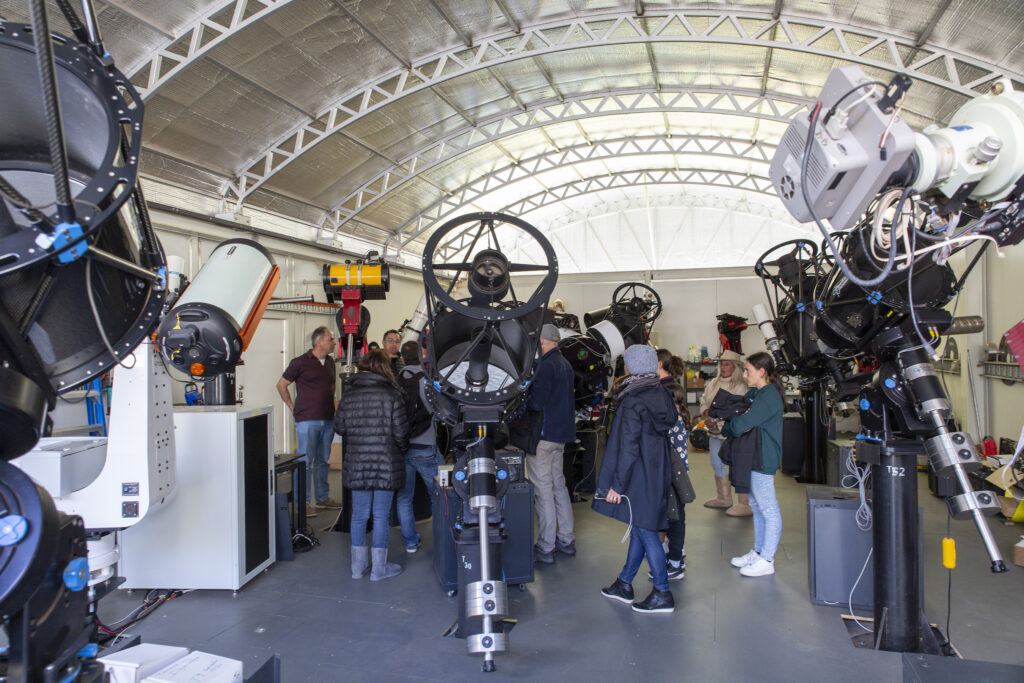 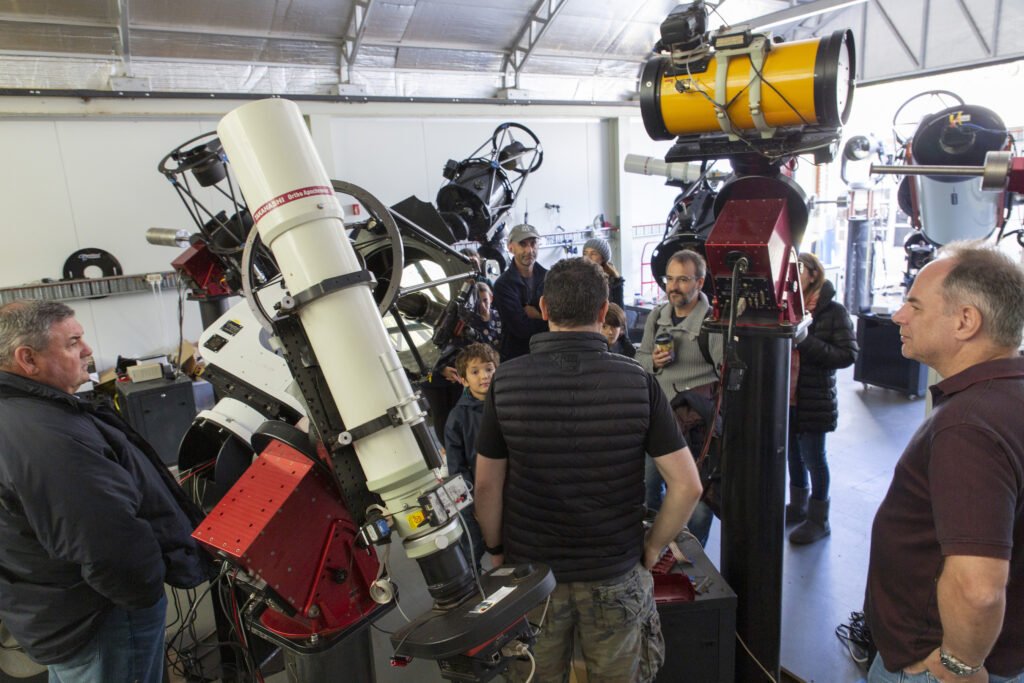 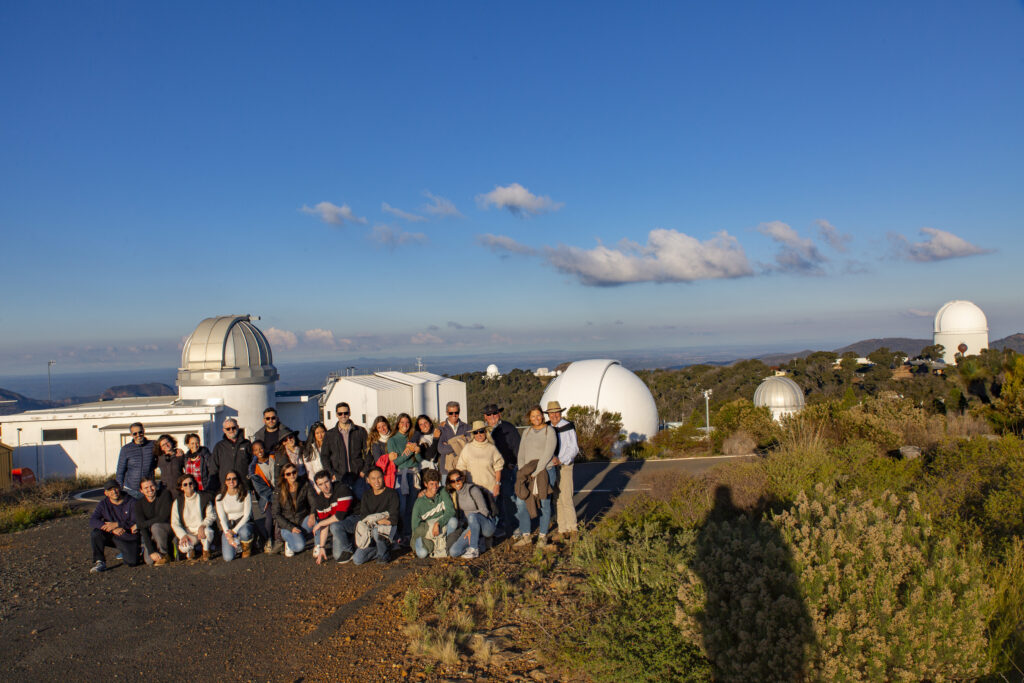 Part of the SRAP-IEAP group on the top of the mountain where Siding Spring Observatory is located. Credit: Ángel R. López-Sánchez. 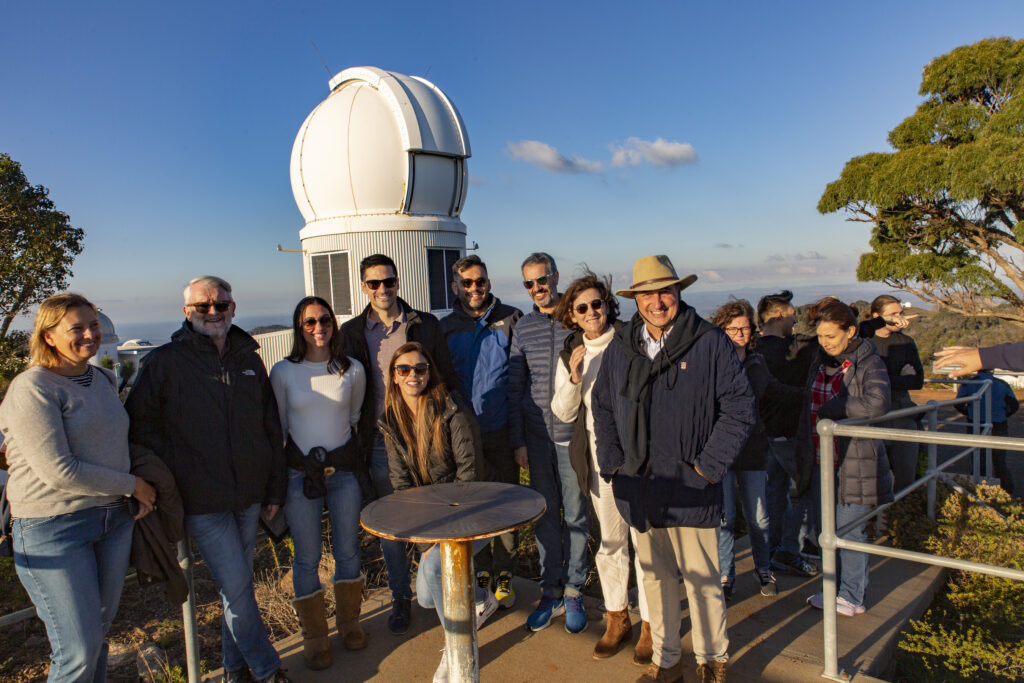 Some of the SRAP-IEAP members near the Skymapper Telescope. Credit: Ángel R. López-Sánchez. 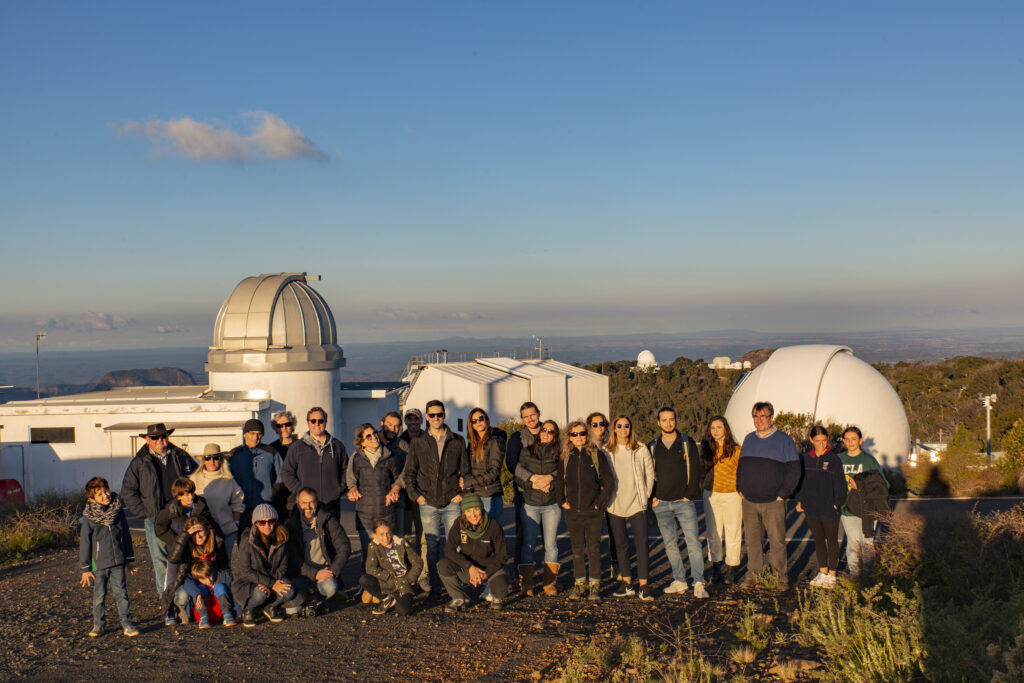 The other part of the SRAP-IEAP group on the top of the mountain where Siding Spring Observatory is located. Credit: Ángel R. López-Sánchez. 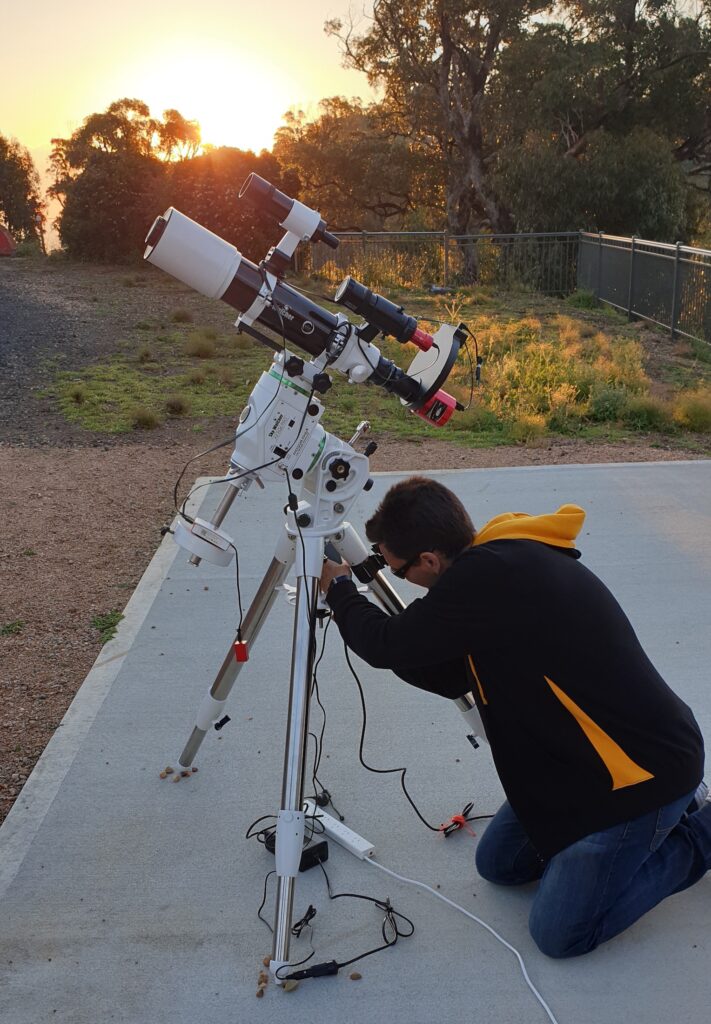 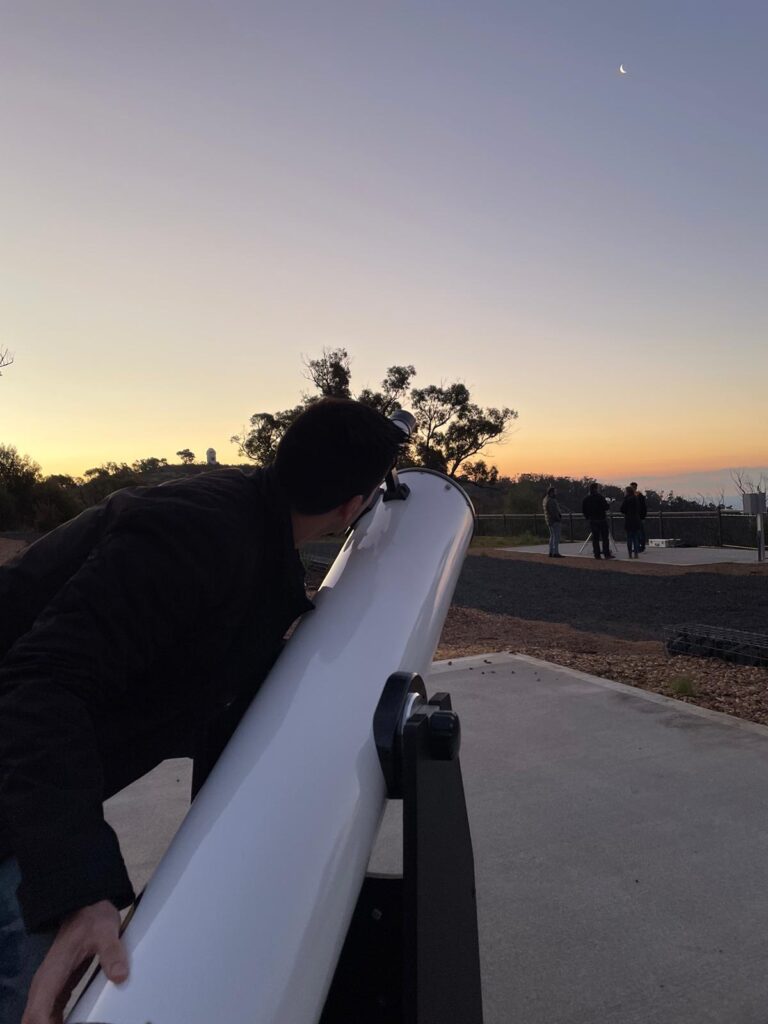 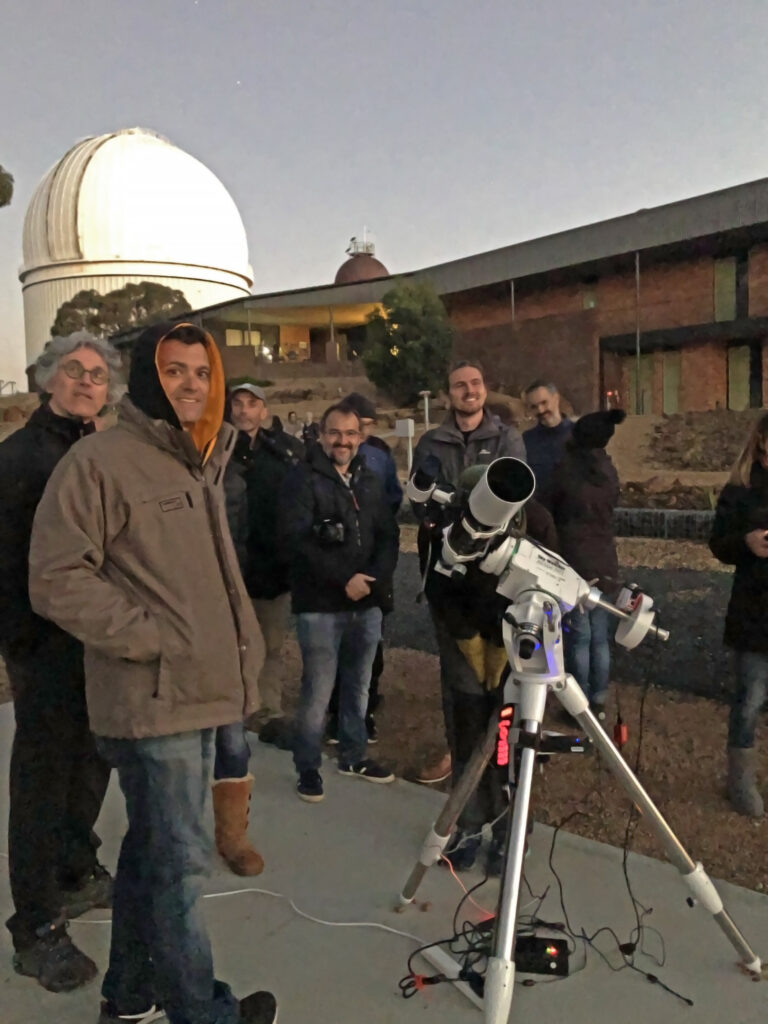 Some of the participants after the sunset preparing to see the Moon. Credit: Eva Millares. 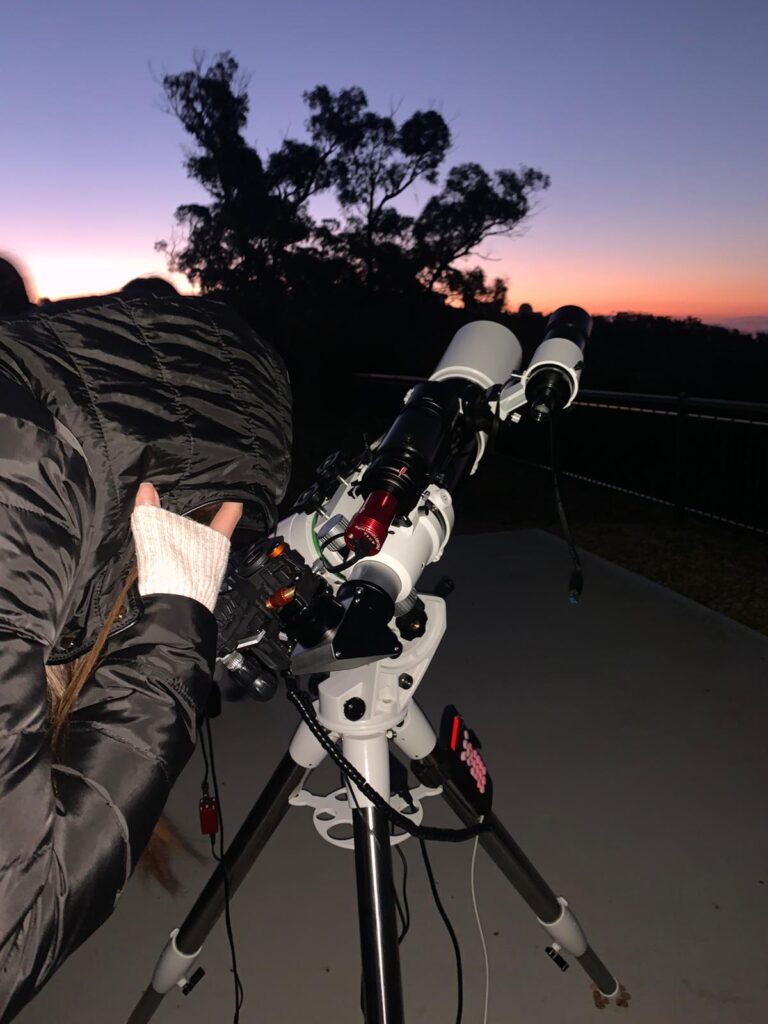 The cold air didn’t prevent SRAP-IEAP members and friends to enjoy the viewing of the moon and stars through the amateur telescopes. Credit: Carmen Salvador. 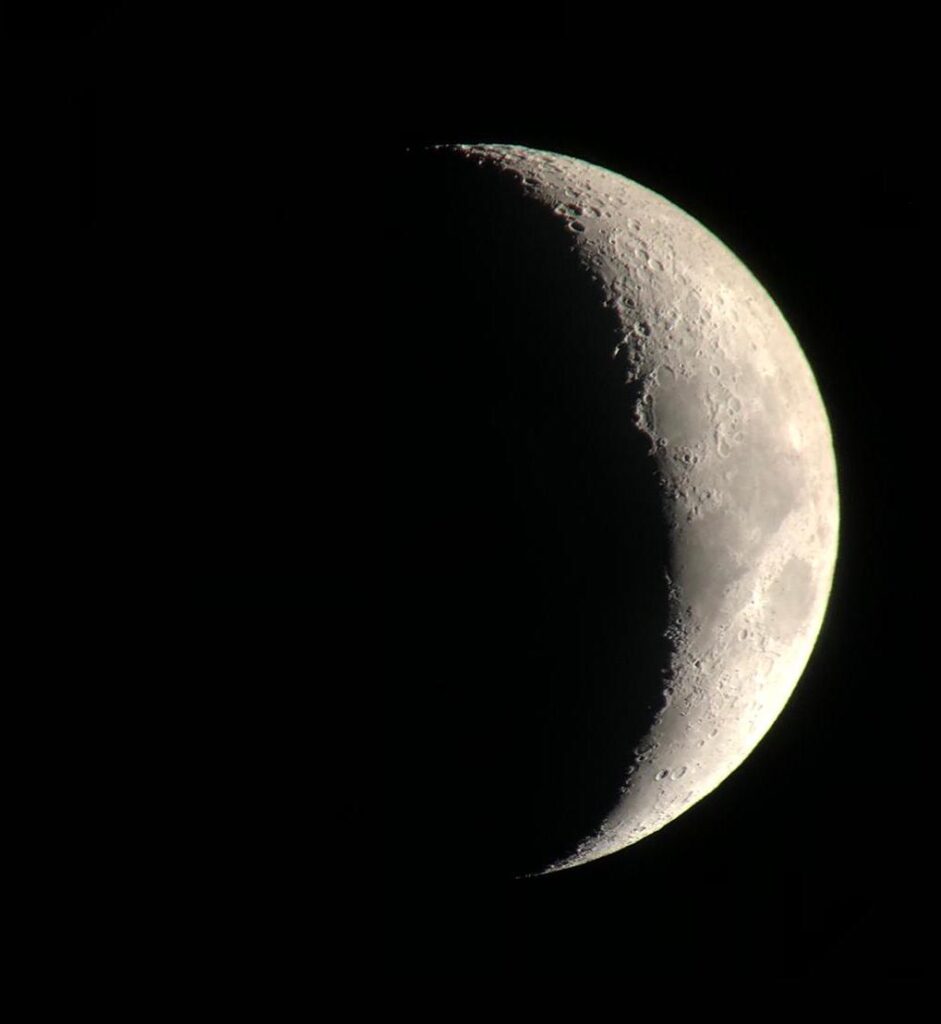 The moon using the 80mm refractor telescope and a 9mm eyepiece using a mobile phone attached to a special adaptor to the eyepiece. It is a single, unprocessed frame.  Almost all participants got a similar photo in their mobile phones. Credit: Carmen Salvador. 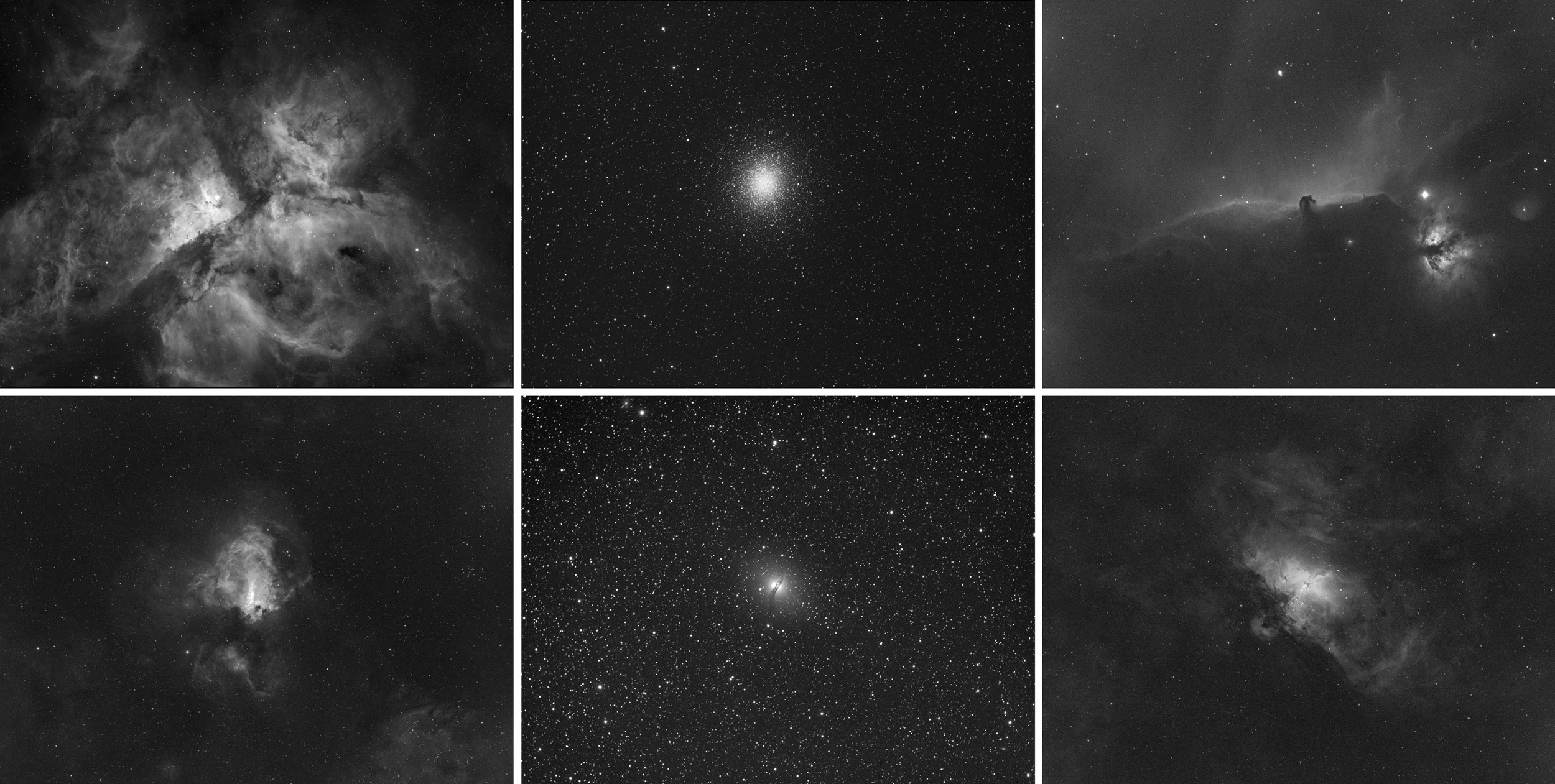 Some of the deep sky objects we enjoyed during the stargazing: from left to right and top to bottom: the Carina Nebula, the globular cluster Omega Centauri, the Flame and Horsehead nebulae in Orion, the Omega nebula, the galaxy NGC 5128 also known as the Centaurus A galaxy, and the Eagle nebula. The images of the nebulae were obtained with a special Hydrogen-alpha filter that only allows the nebular light to pass. Credit: Ángel R. López-Sánchez. 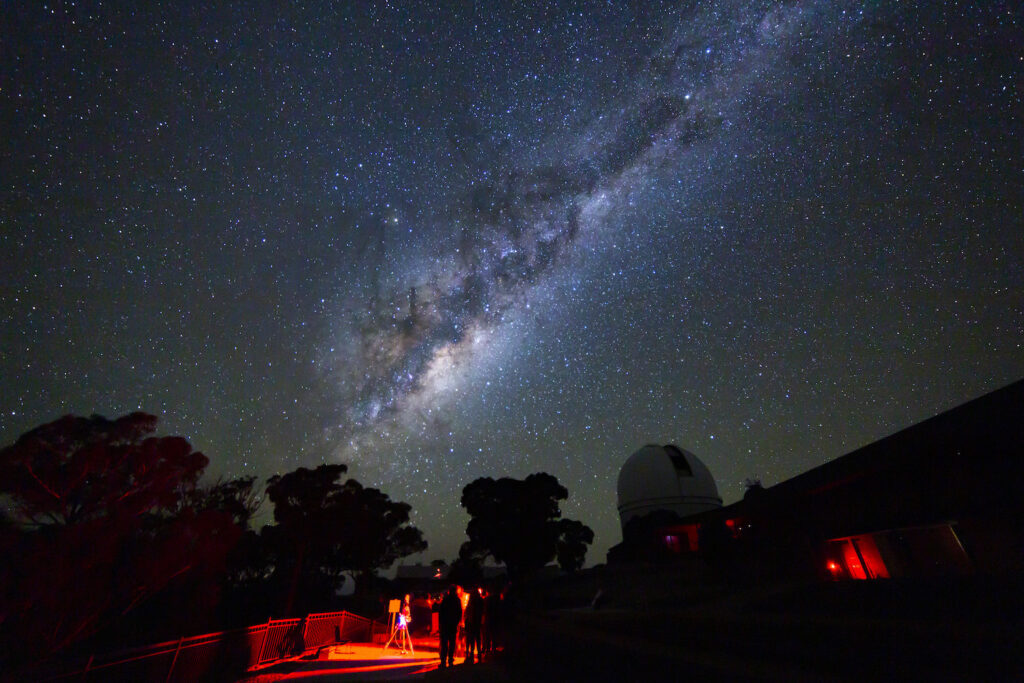 The Milky Way with its Dark Emu rising over Siding Spring Observatory while the SRAP-IEAP group enjoyed the night sky. The silhouette of the dome of the majestic Anglo-Australian Telescope is visible in the centre-right. This is a frame of the time-lapse that you can get from here. Credit: Ángel R. López-Sánchez.