On Wednesday 18th August 2021, SRAP-IEAP organised in collaboration with the Instituto Cervantes de Sídney a webinar to discuss the latest advances in the use of hydrogen as a green renewable energy as part of National Science Week 2021. The event was moderated by SRAP-IEAP member Eladio Hernando and had the participation of Dr Carlos Sánchez Díaz from the Universidad Politécnica de Valencia, Spain, who gave a thorough overview about the production, storage and current applications of hydrogen as renewable energy followed by Dr César Menéndez Muñiz, a Spanish research associate at the UNSW School of Chemical Engineering, Sydney, Australia, who explained his current work on modelling to design vessels and materials for hydrogen storage based on metal hydrides. 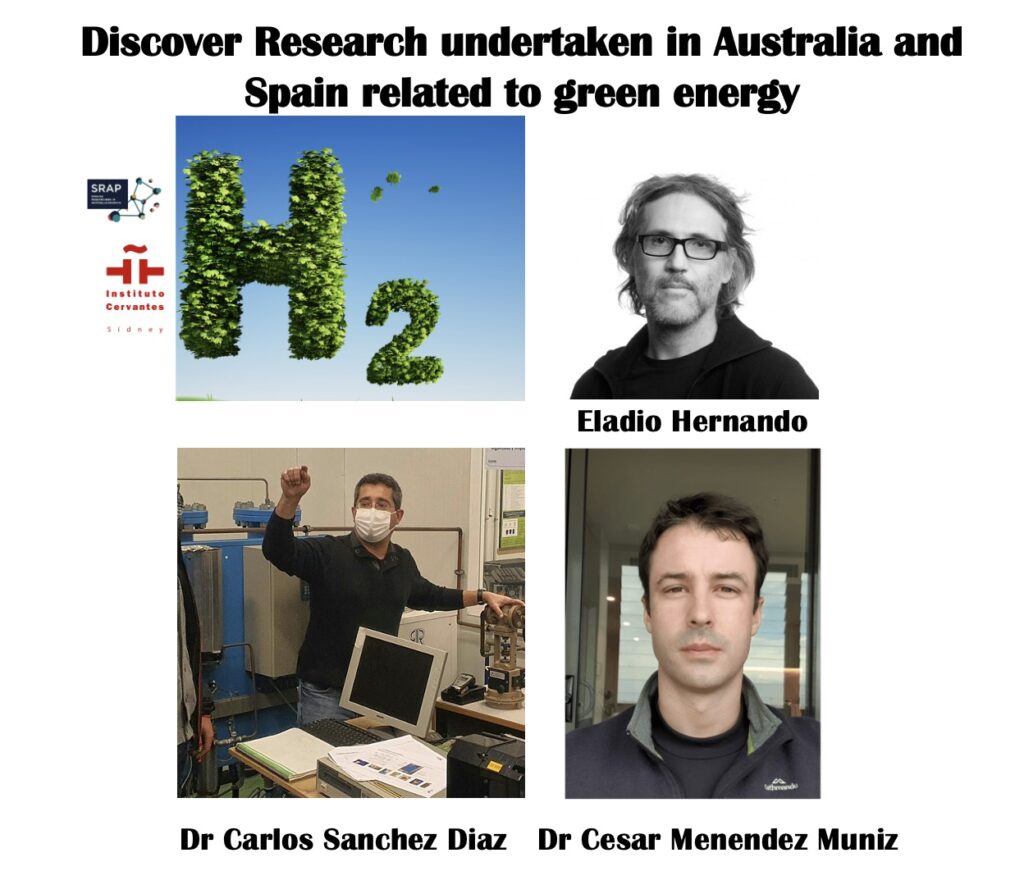 Carlos’ presentation started by explaining the chemistry of hydrogen as an element in nature, its reactions with other elements and its energetic capacity making it an efficient element to work with as a way of storing renewable energy for use a later time when it is needed. Carlos then explained all the different technologies in producing and storing hydrogen including current applications in transport, for heating and as raw material in industrial processes. It was great to hear that hydrogen is being trialled in buses and transport trucks in Spain, Switzerland and Germany, including trains in Baja Sajonia (Germany) and UK. In fact, the technology has been proven to be commercially viable in electrical forklifts and its closed to be fully implemented in excavators. In particular, Carlos presented the current work using this technology in Valencia through authorities involved in Valencia’s harbour management and transport (H2VLC – Valencia Valle de Hidrogeno) and their contribution to the European ASSET group – A holistic and Scalable Solution for Research – a European initiative whose objective is to promote the transition in Europe towards a more sustainable energy model.

Cesar’s talk was about his work on the design of hydrogen storage tanks that use alloys -intermetallic hydrides- as host material. By using intermetallic hydrides as a hydrogen storage technique, hydrogen can be stored in a vessel smaller than the traditional method of storing it as a pressurised gas, making it ideal for residential and stationary applications. In these alloys, the hydrogen is absorbed and stored in the interstitial sites between the metal ions and can be released in a perfectly reversible chemical reaction. Cesar showed in his talk that the design of these tanks relies mainly on the heat management of the heat released and absorbed during the chemical reaction of the, respectively, loading and unloading processes.

The recording of the event is available in our YouTube channel.