Today, volcano research and monitoring of volcanically active areas is needed more than ever. Volcanoes are fascinating wonders of the world, and produce rich fertile soils, attracting both agricultural settlement and adventure tourism. However, active volcanoes also pose significant risks. My research aims to better understand what triggers volcanoes to erupt. Using advanced laser technology that we are developing in Queensland, I study crystals that have grown inside volcanoes and were transported to the surface during eruptions. With this method, I can detect events that triggered historic eruptions, the depth at which they occurred, and the timeframe of the eruption. This understanding of the processes that controlled volcanic activity in the past is crucial to assessing volcanic hazards in the future. Ultimately, my work aims to contribute to a more accurate understanding of volcanic processes to inform risk management practices and safeguard communities, agriculture, and tourism.

Understanding why volcanoes erupt is of global significance. In addition to the hazards to local communities and tourists, volcanic eruptions can impact air traffic on a regional scale, affecting tourism and business. Large eruptions can cause short term climatic effects that affect agriculture. In addition to the impact on local communities, eruptions happening thousands of kilometres away can affect Queensland travellers, holiday makers, and even the crops we rely on for food.

Queensland and Australia are flanked by the southwest Pacific Ring of Fire, which hosts one of the largest concentrations of hazardous volcanoes on Earth. Risks associated with volcanoes include explosive eruptions, volcanic debris flows, mud avalanches, and tsunamis that can reach coastal areas thousands of kilometres away from the eruption. Recent eruptions in Indonesia, New Zealand, and the Philippines have highlighted just how important it is to understand how volcanoes work, why they erupt, and what precursory signs (earthquakes, for example) might lead to eruption.

In order to be able to interpret the likelihood of eruption on the basis of precursory signs, we need to understand how a volcano has worked in the past, its ‘inner personality’. How does it responds to changes such the arrival of new magma (molten rock) at depth? While we cannot travel inside active volcanoes as Jules Verne envisioned (yet!), we can investigate the products of volcanic eruptions: volcanic rocks and the crystals they contain.

These crystals are often smaller than a grain of salt, but they hold crucial information on the volcanoes’ inner workings. In a similar fashion to the way that tree rings record climate variation, volcanic crystals hold a chemical fingerprint of the history of magma prior to eruption. My emerging field of research develops novel analytical techniques to extract deep secrets from the crystals, and better understand where, when, and why volcanoes erupt.

This Queensland-based research is expanding international knowledge on the movement of magma beneath volcanoes. My work has been recognised by recent awards that also highlight the local significance of the research, including a prestigious UQ Foundation Research Excellence Award for 2020, and a Queensland Young Tall Poppy Award for 2018.

Interestingly, Queensland provides an ideal environment for this research. It hosts a long line of extinct volcanoes that track the fast movement of the Australian continent at a rate of 7 cm per year (similar to the growth rate of our hair!). Well-known Queensland landmarks such as the Glasshouse Mountains in the Sunshine Coast, or the Tweed volcano in the Gold Coast hinterland, are relic volcanoes where partial erosion provides a unique window into the roots of the volcanic system. Together with my team, I investigate the geological history of the period during which these volcanoes were active and the nature of volcanic activity through time, providing new insights into the evolution of magmatic systems and the dynamics of our planet Earth. In doing so, we are building the knowledge base that will allow Queensland and Australia to better prepare for future eruptions in the region.

I am passionate about, and deeply committed to, STEM promotion and engagement, including: communicating volcano science to children and the wider community; encouraging girls and young women to consider a career in STEM; promoting an equitable, diverse, and supportive STEM culture; and facilitating productive networks between research, industry, and government.

As a Queensland Young Tall Poppy Awardee, Flying Scientist, and Superstar of STEM, my aspiration is to become a role model and inspire the next generation of scientists. I have interacted with thousands of school students and teachers across Queensland and shared my passion for science and research through class visits, community events, and keynote speeches, as well as via social media. This engagement has translated into increased interest in Earth Sciences among both students and educators.

At the annual UQ Earth and Environment Day, I host a volcano-science workshop where school students use microscopes to investigate volcanic rocks from across Queensland and the world. These workshops foster students’ scientific curiosity, and provide them the opportunity to initiate their scientific journey. I have also been an invited speaker at public events such as Pint of Science 2017 and BrisScience 2018. Having the opportunity to engage directly with community members of all backgrounds and ages, and to discuss questions in an educational and entertaining way, is a very enriching personal and professional experience. The exceptionally positive feedback from audiences highlights the benefit of science engagement.

As Chair of the Dorothy Hill Women in Earth Sciences Symposium, and Co-Founder and Vice-President of the network for Women in Earth and Environmental Sciences in Australasia, WOMEESA, I work towards a more inclusive and supportive scientific community in Queensland, Australia, and at an international level. I actively support the growth and development of a healthy and diverse STEM sector that can help tackle the future challenges of our society, fostering vertical as well as horizontal mentoring through supportive workshops and symposia in 2017, 2018 and 2019. Our innovative efforts have resulted in stronger networks and higher visibility of female geoscientists across Queensland and Australia, as well as new collaborations and mentoring relationships.

I love spreading the excitement for science and have engaged with international media to disseminate research discoveries (e.g., ABC, Le Monde, Newsweek, Einstein A Go-Go, and The Science Studio in the USA) and to provide information on volcanic phenomena during eruptive events in the Pacific Ring of Fire (e.g., ABC, The Guardian). I have contributed to science communication blogs, YouTube videos, and podcasts, including collaborations with Scientific American, and have written for The Conversation. Last year, I was extremely excited to participate in the science-for-kids TV show Scope TV, which showcased my research in the episode ‘Extreme Environments’.

Now more than ever it is imperative that scientists share their knowledge and expertise to help tackle the big environmental challenges we face as a community – and as a Queensland women in STEM, I embrace every opportunity to engage with the public and policy-makers to meet these challenges! 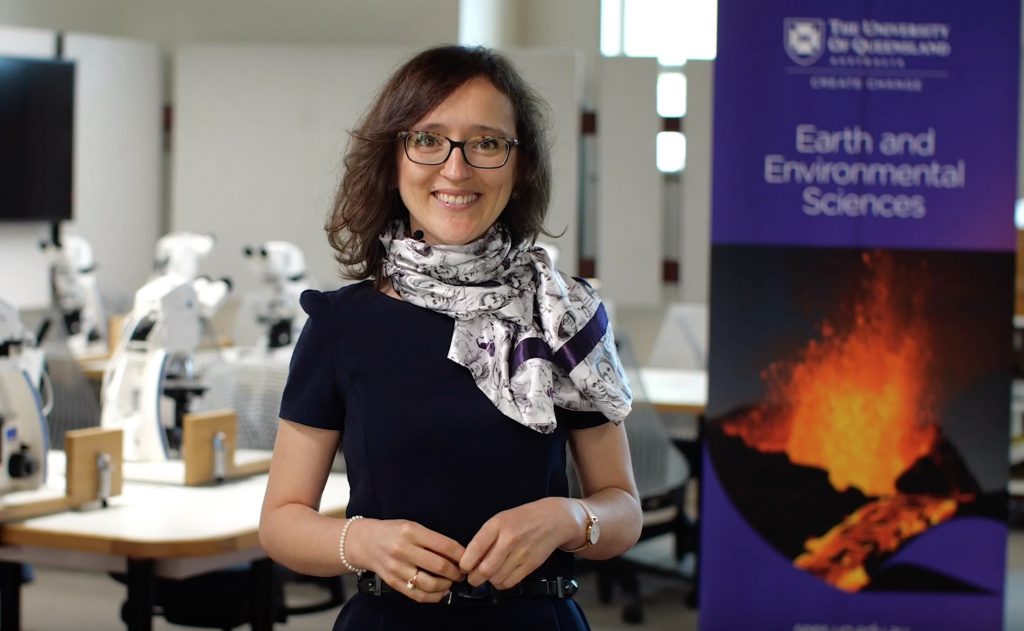