The Spanish Embassy in Canberra in collaboration with the Association of Spanish Researchers in Australia-Pacific (SRAP) are pleased to announce that the nominations for the 5th Malaspina Award are now open.

The Malaspina Award is an honour bestowed by the Spanish Embassy in Canberra and the Association of Spanish Researchers in Australia-Pacific (SRAP) awarded to individuals or organisations who have made an important contribution to the advancement of the relationships between the two countries in science, research, culture and/or technology.

This year, the prize will be awarded at a special Science Diplomacy event in Canberra, on November 18th. 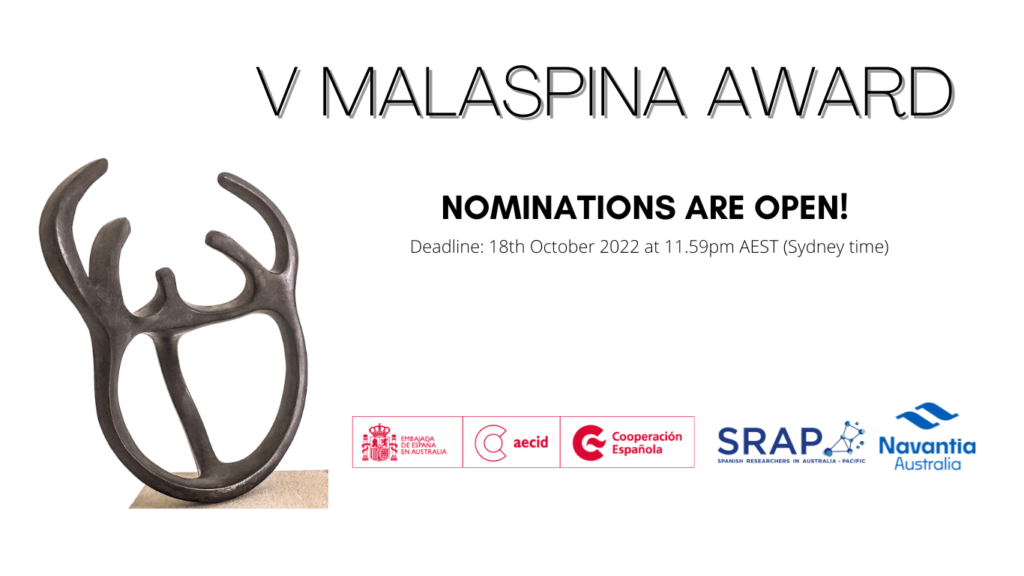 This award is named after Alejandro Malaspina who led the Spanish World Scientific Expedition 1789-1794 that carried out studies in natural history, cartography, ethnography, astronomy, hydrography and medicine in Latin America, the Pacific and Australia.

The Malaspina Award is granted annually. It is bestowed to contributions in science and academia, and to culture and technology in alternative years. In 2022, the prize will be awarded to a significant contribution in fields of science, research, and/or academia.

The 5th Malaspina Award has been sponsored by Navantia Australia. The award’s statuette is designed and handed over by the Spanish artist Óscar Martín de Burgos, well known for his designed sculptures for international awards.

Nominations are open to any Australian or Spanish citizen and organisation registered in any of these two countries. The nomination of individuals can take place regardless of the Country of residence.

The Malaspina Award Committee will be comprised of high representatives of the two organising institutions. Every tentative candidate should provide:

Nominations should be forwarded to the Embassy of Spain mailbox from now until October 18th through the following e-mail: malaspina.award@srap-ieap.org. A confirmation email will be sent to acknowledge the receipt of the application.

All the information about the 5th Malaspina Award is also available in PDF format.