Skip to content
Home » Blog » Activities » Announcement of the winner of the 5th Malaspina Award: RMIT-Europe

The Malaspina Award is an honour bestowed by the Spanish Embassy in Canberra and the Association of Spanish Researchers in Australia-Pacific (SRAP). It is awarded to individuals or organisations who have made a significant contribution to the scientific and/or cultural relationships between Spain and Australia. The Alejandro Malaspina Spanish World Scientific Expedition, was the first foreign mission to visit Sydney in 1793, just five years after the arrival of the First Fleet.

The 2022 Malaspina Award has been conferred to RMIT Europe. 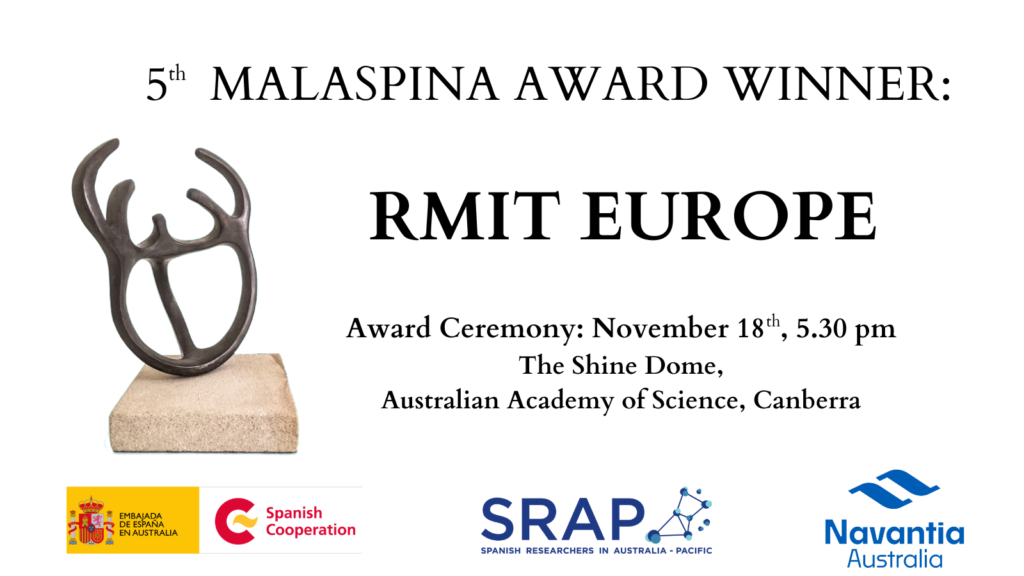 RMIT Europe has connected industry partners in Europe with Australia to solve critical problems impacting the community and the environment. In Spain, RMIT has produced an outstanding educational offering and participated in projects with industry partners such as Arup, Inditex and other companies. In 2020 RMIT received the European Commission ‘HR Excellence in Research’ award for its environment of excellence driving the adoption of European best practice in both its Spanish and Australian operations.

The Malaspina Award Ceremony will take place at the Australian Academy of Science in Canberra on Friday 18 November 2022 at 5:30pm.

The event will count with the participation of:

The Award will be collected by Prof Alec Cameron, Vice-Chancellor of RMIT.

The 5th Malaspina Award has been sponsored by Navantia Australia. The award is embodied by the statuette “Heart” designed by the internationally renowned Spanish artist Óscar Martín de Burgos.

The Malaspina Award Ceremony is an invitation-only event. If you wish to attend, please contact us before COB Wed 16th November.