How can half of our genetic information be ‘junk’?

Only a really small portion (~2-3%) of the genetic information in our genomes encodes what scientists thought to be functional information necessary for the survival of cells. The rest of the genome was thought to be functionless and was called ‘junk DNA’. Surprisingly, just as the Universe is not only made of ordinary matter but mysterious ‘dark matter’, our genomes are not only made of genes but of repetitive sequences among others. It turns out that this 50% has functions that we’re only beginning to understand. A portion of this 50% can ‘jump’ to other locations in the genome. These are called ‘Mobile Genetic Elements’, or transposons. These sequences are found in all living forms and have made their own way though evolution jumping where they can be transmitted to the next generations like egg cells and developing sperm, which has earned them another nickname of ‘selfish DNA’.

Jumping genes are a significant source of mutations within cells. Such impacts have been reported to be involved in diseases like Haemophilia, Cancer and have been attributed to be involved in some neurological diseases. Also, one of the most discussed or controversial roles of the function of these dancing molecular entities is their contribution to the uniqueness of individual brains and neural plasticity, as they may be the molecular sensor or connection between neuronal genomes and the environment across the lifespan of organisms.

Find out how we’re learning how these ‘jumping genes’ shape our lives in this Research Bites webinar, that was organised and hosted by our member Dr. Carmen Salvador Palomeque, on Saturday 5th September 2020. 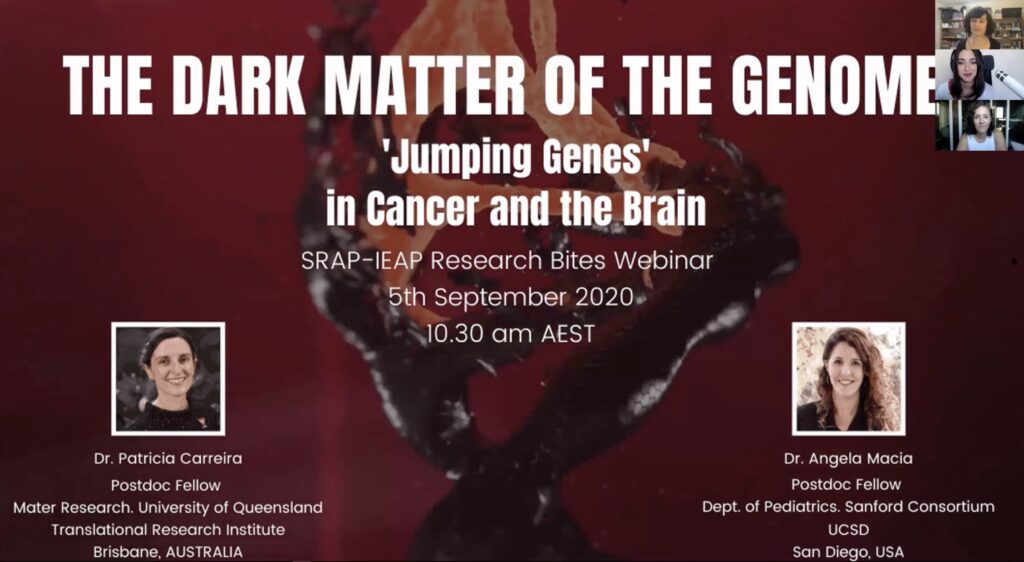 Title: ‘Mobile genetic elements in cancer: the masked regulators?’
Summary: There is a particular genetic feature shared amongst several cancer types – activation of mobile elements. Patricia will speak about her research where she imitates aggressive tumour conditions using cancer models to investigate why mobile elements are activated in cancer and how this activation is influencing cancer progression.

Summary: There has been an increasing interest in studying mobile elements as their activation has been observed and in a variety of neurological disorders. This activation in the diseased state is not fully understood. During this talk, we will review the evidence and discuss whether transposable elements might contribute to the disease pathology.

The full video of the event has been included in our YouTube channel: