The Malaspina Award is an honour bestowed by the Embassy of Spain in Canberra and the Association of Spanish Researchers in Australia-Pacific (SRAP). It is awarded yearly to individuals or organisations that have made a significant contribution to the scientific and/or cultural relations between Spain and Australia.

This award takes its name after Alejandro Malaspina, who led the Spanish World Scientific Expedition 1789-1794, carrying out studies in natural history, cartography, ethnography, astronomy, hydrography and medicine in Latin America and the Pacific. The expedition visited New Zealand, Tonga and Australia. It documented life in Sydney in 1793, just five years after the arrival of the First Fleet.

The IV Malaspina Award has been sponsored by Navantia Australia.

PDF file with the Media Release 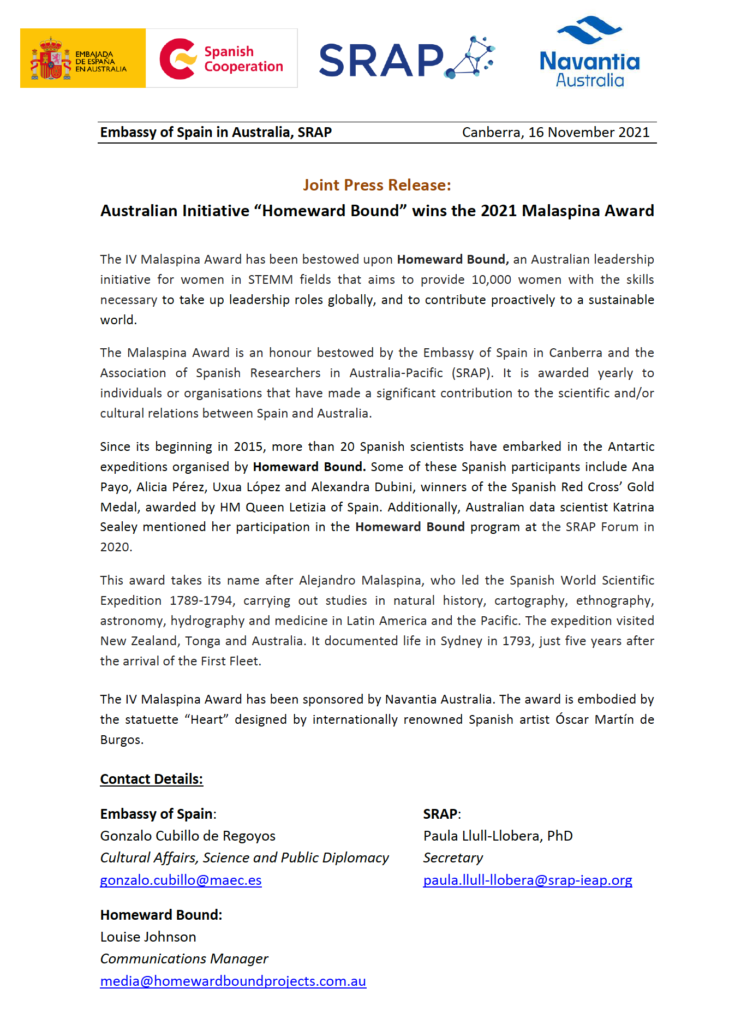 The award ceremony took place on 28th November 2021 in Sydney, on the occasion of the 7th Australia- Spain Research Forum «A Collaborative World» by the Spanish Researchers in Australia-Pacific (SRAP). HE Ms Alicia Moral-Revilla (Ambassador of Spain in Australia) and Prof. Luis Salvador Carulla (Deputy director of the Health Research Institute, University of Canberra & Honorary President SRAP) presented the 4th Malaspina Award, that was bestowed upon Homeward Bound. Dr. Katrina Sealey (Australian Astronomical Optics, Macquarie University), who participated in the #TeamHB3 and also in our 6th SRAP Research Forum, collected the prize on behalf of Homeward Bound.