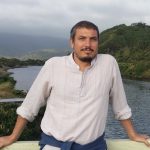 Luis Fernando Angosto-Ferrández is a senior lecturer in the departments of Anthropology and Spanish & Latin American Studies. He has extensive fieldwork experience in Latin America and Spain and, in addition to his scholarly work, he is a contributor to various public media outlets.
He has an ongoing research interest and expertise in Latin American politics and recently completed a book monograph analysing class formation and forms of collective action among indigenous peoples in Venezuela. Other recent work in this area includes an edited volume on geopolitics and the new regionalism in Latin America, where he developed identity formation theory to analyse the impact of Bolivarian foreign policy beyond the continent.
He has also developed comparative work on race and ethnic relations in Latin America, with a particular focus on forms of categorisation and their impact on everyday life and politics. In relation to this work he has coordinated two projects analysing national censuses throughout the continent, with a focus on explaining the impact of census designs and results on identity formation and public policy.
The analysis of contemporary capitalism and the ways in which human sociality affects and is affected by the creation of new forms of commodities and property is another area in which he develops research. In 2016 he published a co-edited volume on anthropological approaches to the study of value and new forms of sociality across the Global North and South.